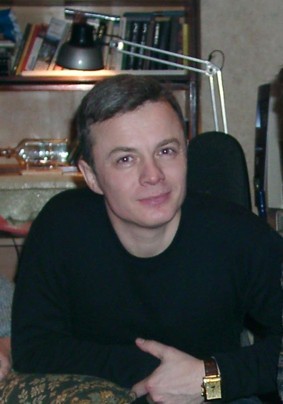 Ship in Bottle artist Vladislav Babkin works and lives in Tiksi, Yakutiya, Latitude 71 41’ North, Longitude 128 54’ East, and his home base is the city of Schelkovo in the Moscow region of Russia. He is a 39 year old father of a daughter and a son.

Vladislav has been building ships in bottles as a hobby for 15 years. He is a dedicated artist spending approximately 3 -4 hours a day modeling.  He works on his ships in bottles 10 months a year, completing up to 12 bottles a year to sell and then he rests for the remaining two months. Vladislav also spends time on what he labels his “serious models” that he enters in to competitions every two to three years. With each competition model Vladislav demonstrates his ever increasing skill and talent with wonderful details and improved techniques. In addition to local and regional competitions, Vladislav’s models have been entered in world competitions in both Europe and Russia.

He spends considerable time studying old-time books and drawings connected with processes and techniques in building the sailing ships in Russia.  Vladislav has authored several articles on his techniques for making ships in bottles and their history which have been published over the Internet.

Congratulations to Vladislav Babkin for taking first place and winning a gold medal in the Ship in Bottle class at the 2007 Russian Competition. To learn more and see Vladislav's wonderful ship click on the following link.