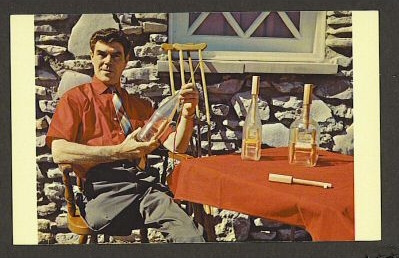 Jesse Jackson made chairs in bottles, mostly in the 1960’s, in the area of Renfro Valley, Kentucky.  He was a double amputee who sold his bottles to tourist as souvenirs.  He made several styles but they all seemed to have in common a tall wooden shaft stopper with a small cross arm making it impossible to remove the stopper. He was featured in a postcard from the Rock Castle Steak House in Kentucky.  The card read: “See Jesse Jackson, double amputee, perform his famous art of building a chair in a bottle at the Rock Castle Steak House, located at Renfro

Valley and Mt. Vernon Interchange off I-75.”

At least 3 of his bottles have been reported as having some sort of oil residue inside.  It is possible that the oil is actually syrup from the Kayro Syrup bottles he used to build in.

There are no images in the gallery.