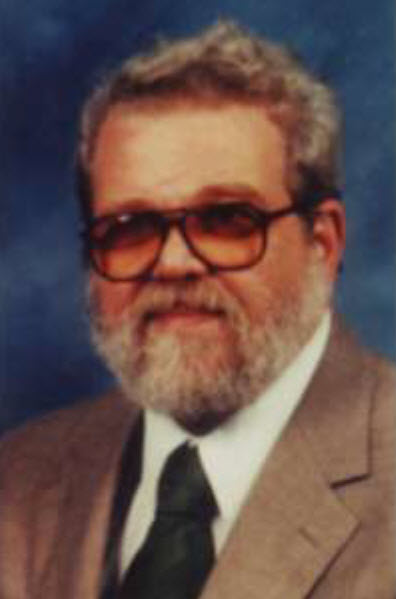 Once again we have lost one of the giants in the ship-bottling business. Charles Hand, our premier North Carolina ambassador, passed away on Thursday, 23 April 2015 after a prolonged period of failing health. He was 78.

Charles joined our organization over thirty years ago when we had just formed up, and rose to become our Vice-President. His enthusiasm for bottling objects and ships was contagious and was revealed by his very frequent contributions to our own newsletter, BOTTLE SHIPWRIGHT, to MODEL SHIP BUILDER MAGAZINE and to BOTTLESHIP, the newsletter of the European Ships-In-Bottles-Association. Charles worked in Charleston Naval shipyard for 31 years and his close asso-ciation with the large naval vessels there inspired many of his bottled works, including destroyers, coastal patrol craft and even an aircraft carrier with planes on the deck or just airborne. Many of his models are now proudly displayed in mu-seums and in private collections nationwide.

In his capacity as vice-president he was continuously engaged in the dissemination of modeling infor-mation between members of our far-flung American and Canadian builders and fellow kindred spirits overseas. He appreciated that there are no national boundaries between bottling enthusiast’s, so his efforts were well rewarded.

Charles Hand’s passing is a loss that will be felt throughout the bottling community and to me, person-ally, as his long-time friend and frequent correspondent.

Thinking Small ... Very Small
Charles Hand bottles up the Ramblin' Wreck and just about anything else
By John Dunn

Over the past 25 years, Charles Hand has been performing some mighty small feats. It's really no big deal when you consider the Ramblin' Wreck, a 1930 Model-A sport coupe, has been scaled down and reassembled inside a bottle that measures 1.5-inches with a 1 /4-inch opening it the neck.
Hand, IE '58, began making models in bottles in 1983 a decade before retiring as a mechanical design engineer Charleston Naval Shipyard in South Carolina, where he supervised Department of Defense modifications on ships and submarines.
"I always had it in the back of my head to do ship models in a bottle," Hand said. "I finally just took the time to learn. When I had a chance, I would do one of the ships that I was working on and give it to the ship's captain or engineering officer."
The model-in-the-bottle always included all of the design changes and modifications that had been performed on the ship. "We would receive all kinds of cooperation after that," Hand added.
Hand and his wife have retired to a log cabin home on 11 acres in the Blue Ridge Mountains, 15 miles from Canton, N.C. "Sometimes it takes a four-wheel drive vehicle to get here," Hand said. "A couple of weeks ago we had eight inches of snow." Going about the business of building a model in a bottle demands a few ready quips, he said, "There's a standard answer for drinking folkswhich we're not: First, you've got to empty the bottle.
"You have to make you own tools," he adds. "One of my favorites is to take an ordinary hair clip like the ladies use when they are curling their hair, put it on the end of a bamboo skewer, book a wire to it and, bingo, you've got a long forceps with a spring on it that keeps it closed."

The amount of time a project takes depends on the details and intricacies involved, Hand said. Ralph Preston of Vermont, who is renowned in the field, built a ship in a bottle that took him 13 years to complete, he said.
Hand has tackled many projects other than ships, including air-planes, a Land Rover, a city bus, an ox-drawn covered wagain and a doll house. The Ramblin' Wreck was built out of moldeling material that comes in precise sizes and took several weeks to complete.
"Basically, you build it outside the bottle and then try to assemble it inside the bottle, " Hand explained.
The bottle came from a local veterinarian "who appreciated my business and recycling uses," Hand said. It originally conatined one milliliter of serum.
Hand refers to himself as a carafologist-- a word coined by the late Jack needham, who wrote a book about the craft of building models in bottles. Many of his works are purchased by collectors, and the Ramblin' Wreck model sells for $100.
Hand also writes about his craft.
"I recently did an article about a Colonial Schooner," he said. "I take pictures as I go along and then write the article."
Among the more than 30 articles he has written are: "Ships In Bottles for Beginners," "Better Photos of Your Models," amd "An Affordable Approach to Models in Bottles." He is a member of both The Ship and Bottle Association of America and the European Association of Ships-In-Bottles. Some of his articles have been translated and reprinted in journals of associations in Norway, France, Germany, The Netherlands, U United Kingdom and Japan.
It's a craft that requires patience.
"We have a saying," Hand said. "It's tricky, but there is no trick."
____________________________________________________________________
The above article first appeared in the Georgia Tech Alumini Newsletter, Tech Topics, Spring 1998, and is being reprinted here with permission.

The following article,was written by Charles Hand and first appeared in the publication "Even Keel" September 20, 1991. 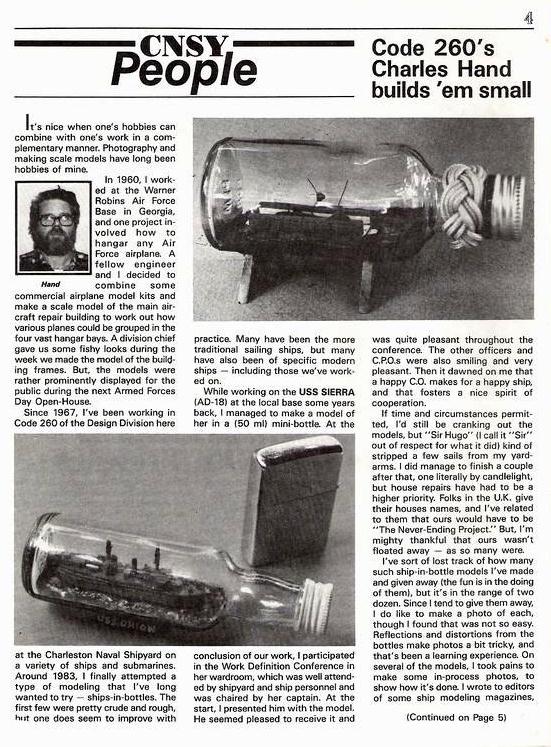 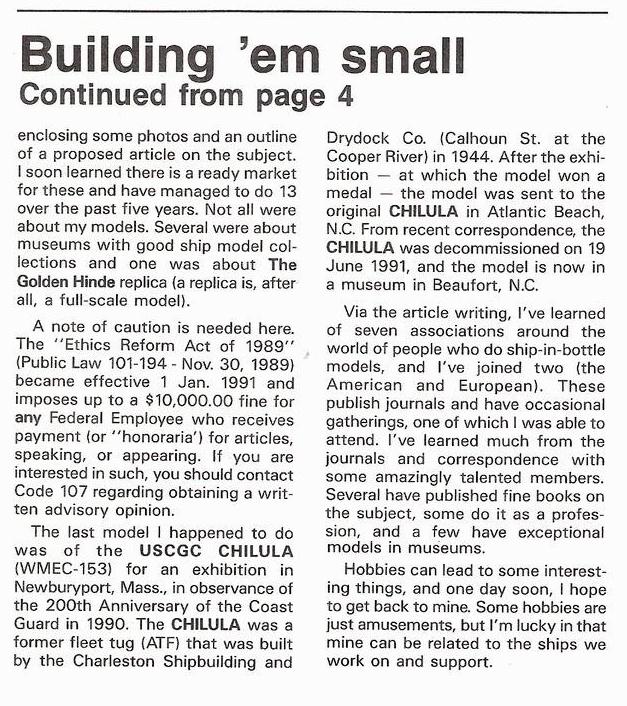