My newest ships are now in much larger hand-blown bottles but I still have quite a collection of old bottles that I will eventually use so not all bottles that are the best will be the best so my practice runs are also sold as well ..cheap!

Although I built many ships as well as in the bottles I am not really commercial ... I actually hate what I see of these cheap ship in bottles flooding the market that were built in sweat shops! THEY ARE THE ENEMY!  They are the very reason why the artists cannot make the art high end by placing cheap wannabees in gift shops. I will choose when and what I design and if you like it you got lucky and chances are you will not see it built twice! 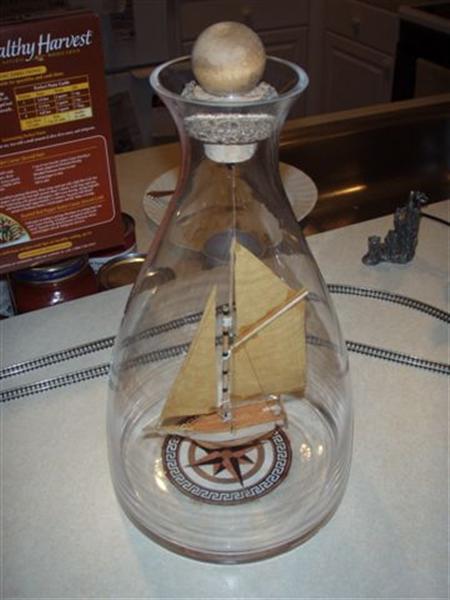 I use to use standard wine bottles but have moved up to fine polish hand-blown glass,occasionally I will work inside a light bulb.I find my bottles by chance. and thus projects are catered according to that type of bottle, Occasionally one bottle is surprisingly defective and fails to survive my heating process so a ship must be rebottled! some bottles are so weak that I literally glue the vessel inside the glass to the glass and forsake using any heat! 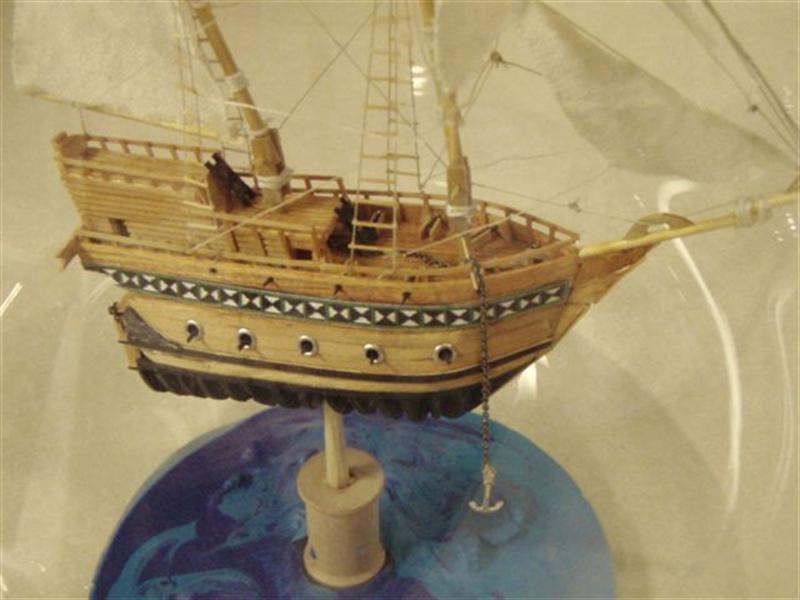 When I get serious is when I find a really nice rare bottle, fine glass!The ships are usually bread and butter constructions carved from balsa wood with folding masts but lately I have been plank on framing all my vessels as well as decks! I have designed different wooden hinges that actually are designed to be shown off! My hinge design was posted on youtube so you will see them in action in the videos. 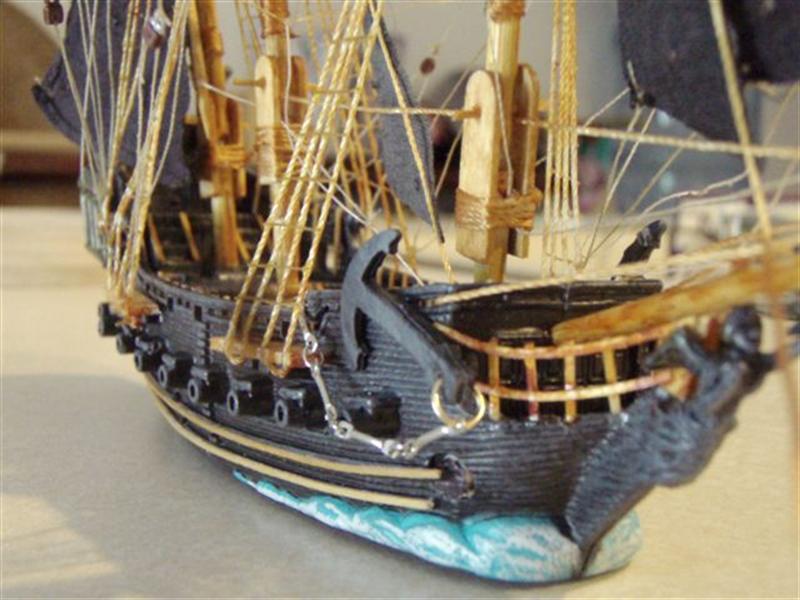 The Black pearl is an exception in hull construction! I actually performed a kit bash and placed my rigg over what was once a toy! Hey the bottle fits the hull ,so I make it happen! Disney would love to get there hands on this special custom build! My planks are bought from a hobby shop in Miami , They are Micro cut lumber basswood from Midwest products co. which caters to model railroading. The wood is stained with, get this...Iodine solution! - meant for first aid kits!This staining process is safer to use indoors and doesn't reek of industrial fumes in my bedroom! most important is that it dries fast! super gluing is bad for inside the bottle because it sometimes fogs up the glass, sooner or later... I use Elmer's white glue or rubber cement when inside a bottle. 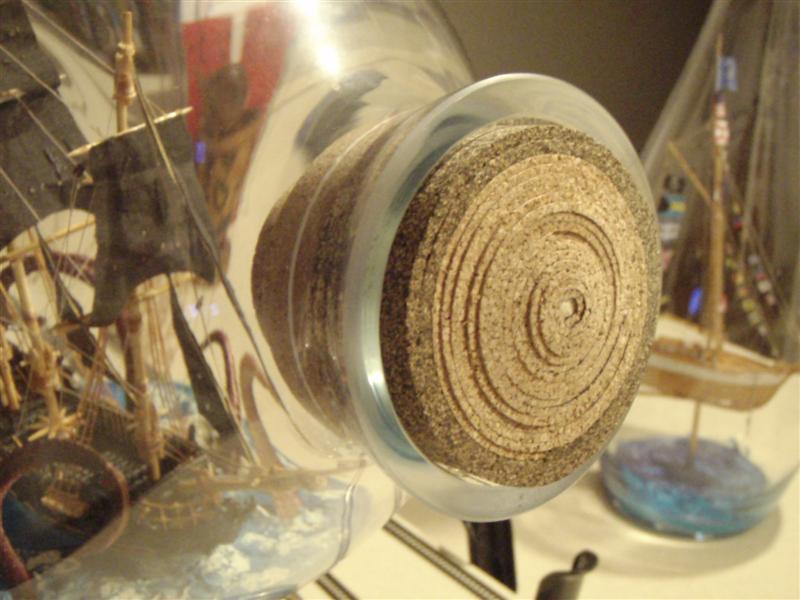 I have developed my own style of making corks for any size bottle, I buy a sheet of cork and cut it into very long ribbons. starting with super glue and a recycled Japanese chopstick from the sushi bar, I would coil the cork ribbon around the chopstick and build on this until I reached my desired size. super glues seals the deal!

The Seas:I used to use wax but now I use clays that are sort of soft wax like , I would take the bottle and place it into position in a pan of water and start heating it up in the kitchen, sometimes to a boil but I know what bottles can handle that! The heated bottle then gets small chunks of clay that then melt to form the waterline. some ships in bottles like the black pearl featured can stand without a stand perfectly balanced because I will sometimes load heavy lead and pennies in with the melted 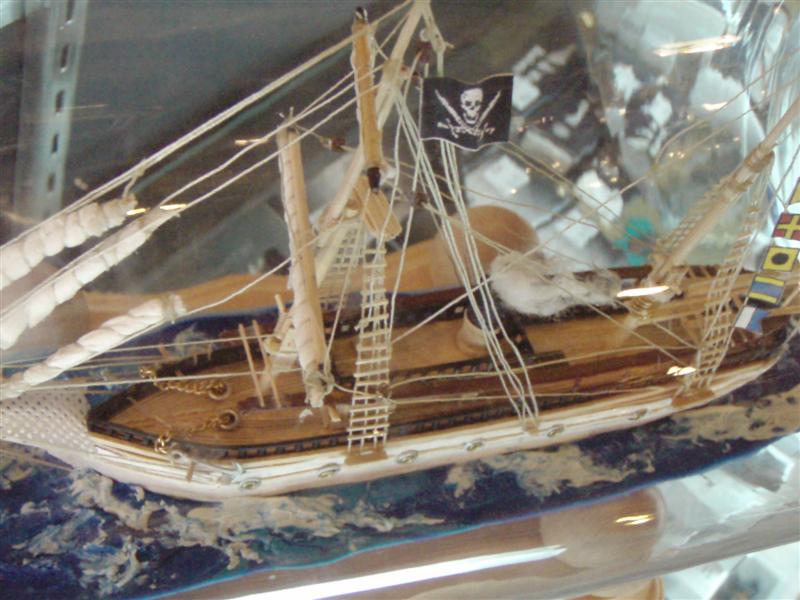 clay wax. In the case of a compass ship, a magnet is also set in the melted sea! now the balanced bottle will point North!

A small wood cut of the ship is floated into position and the bottle is allowed to slowly cool so the wax/clay will harden. Note: that mixing different colored clays will produce some fantastic effects, I also sometimes use any colored clay unrelated to an ocean and then manually pave the colored clay on top! The operation:The finished vessel is ready to be placed inside the bottle, Often It is made in 2 or more layers. The bottom half is the part that is glued to the waterline and the top half is rigged to fold. complicated lines are pulled and often must be sorted out and untangled, On rare occasions a mast hinge will pop out and out come all manner of medical tools, tweezers, cursing and sweat!

I used to use just a bamboo skewer but I have expanded my tools to bent wire and a scissor like medical tweezers... My Dad is a doctor! If the ship uses glues and paint that is non flammable or that it has already dried I would carefully cut the lines that pull the masts and sail rigging up using a nice sunny day and a carefully beamed sunray using a magnifying glass! so far I only lost one ship to explosive fire, so I ventilate ore use only water base glues.

Selling the Art:Selling my SOUL!:

I send my art to Nautical shops I cannot keep up with demand and only the most expensive ships are ever present. As good will I have sent ships to local libraries and have donated some. I rarely really make money so Its still a hobby.  I have been bottling ships since 1992. go ahead and use this info to spread the knowledge of this venerable art!"