Building the Blazer - by Frans Dekker

Building the Blazer - by Frans Dekker

From the Artist, Frans Dekker 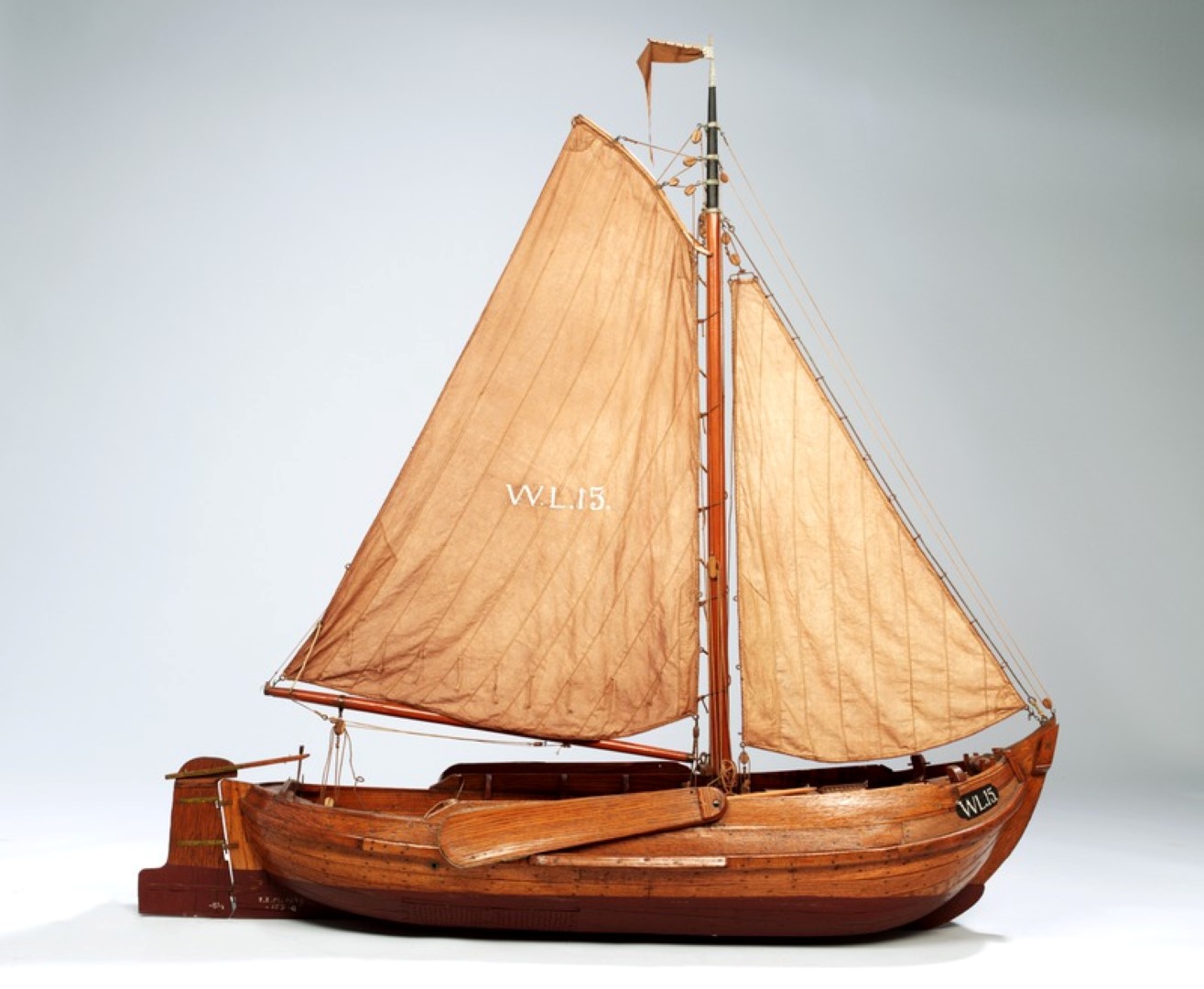 "I have made the model of an old fishing ship. The type of a so called Blazer.

Because she was a very good see going ship they were also used as rescue ship. 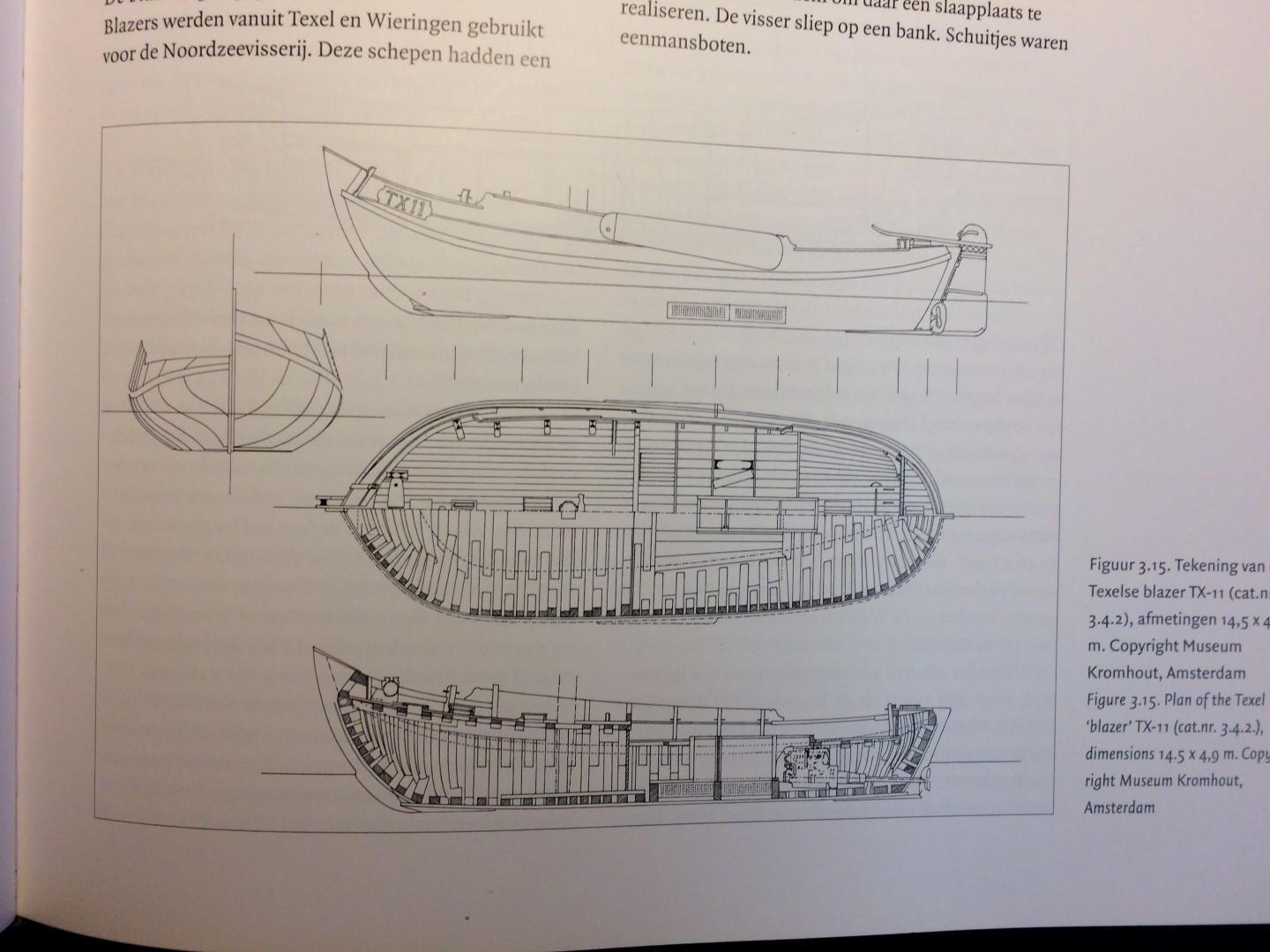 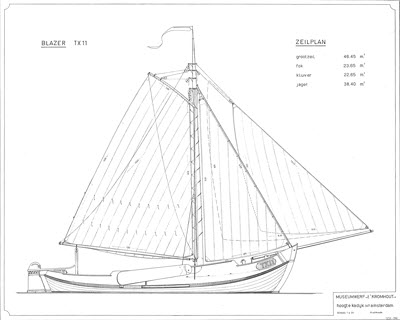 The hull is made in two parts of peerwood and put together whit two thin wooden pins. Instead of the most fishing ships the blazer did not have an open hull but she had a so called laningen. A deck made of separated wooden planks behind the mast. Before the mast the deck is steady. 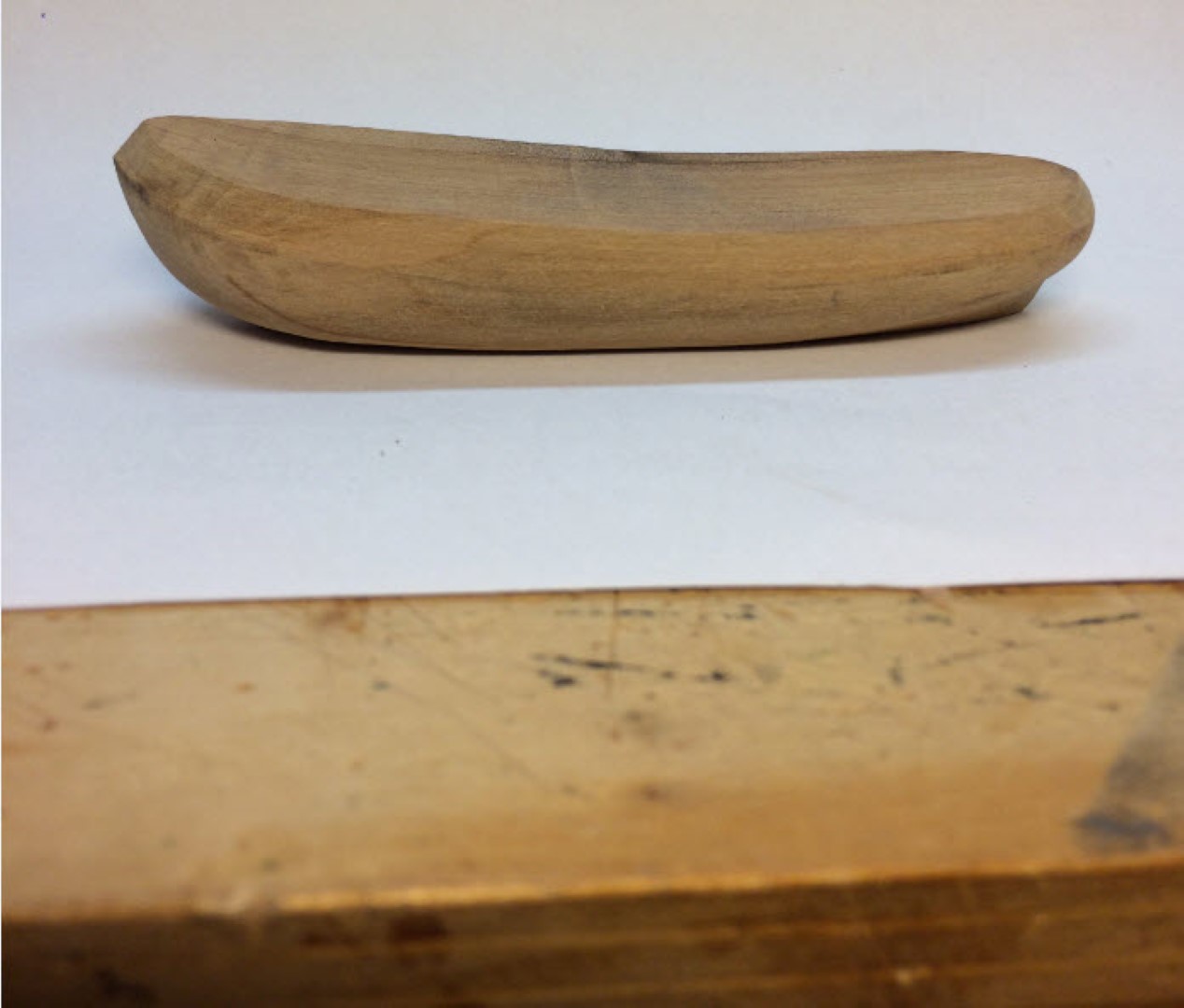 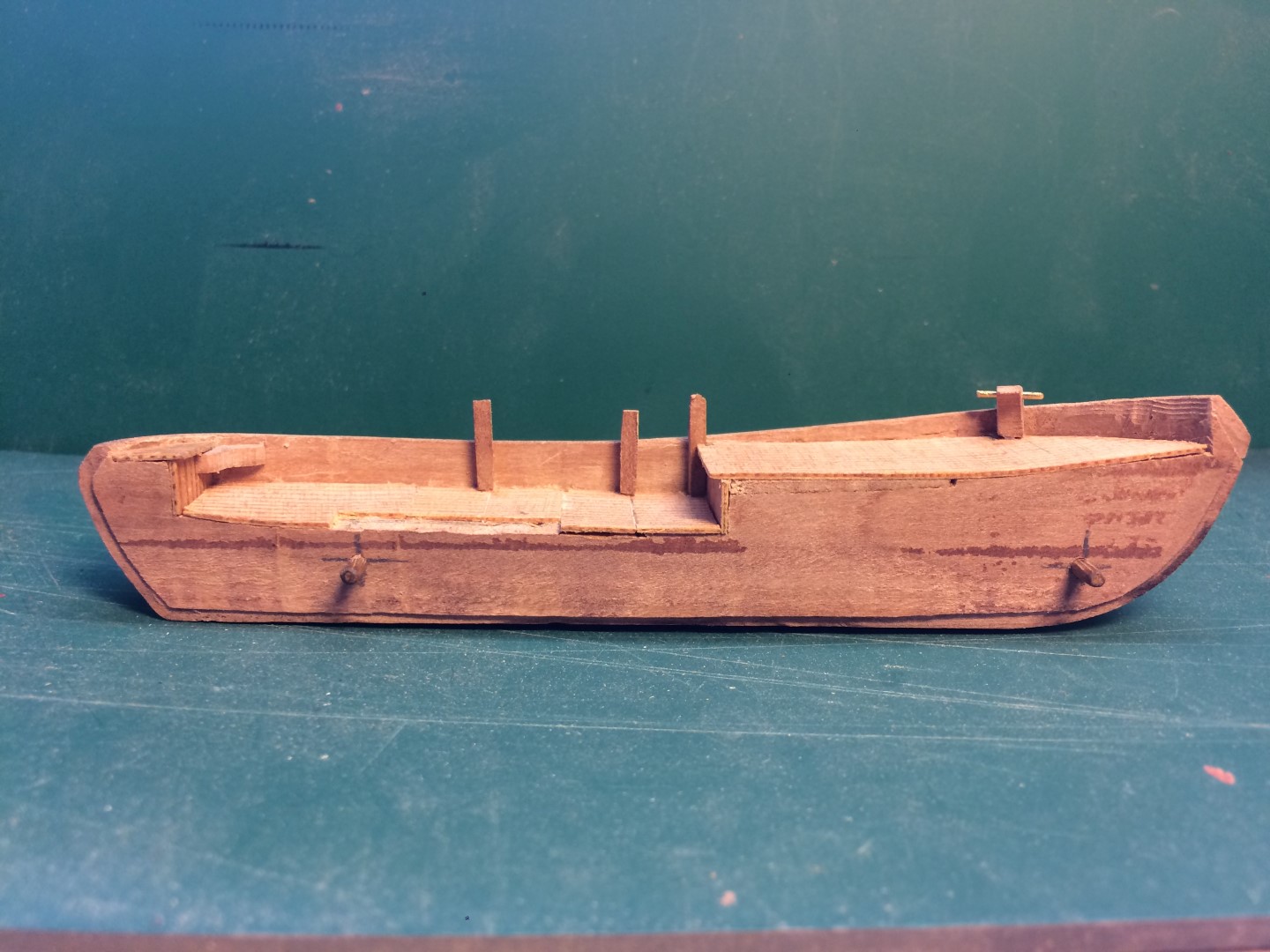 The mast is original without any staging but in the later years the insurance company demanded staging on each mast by see going ships. Original the bulwark is made of one piece of wood but sometimes the upper parts are made of lose planks steadfast to the rafters. In this case I had to make them of lose planks otherwise the half parts of the hull would not go into the bottle. I separated them from the bulwark and made some rafters on it. The rafters were put in corresponding holes in the deck. To show the caulked planks in the deck I made some fine lines whit a sharp knife and made the black lines whit a sharp pencil. 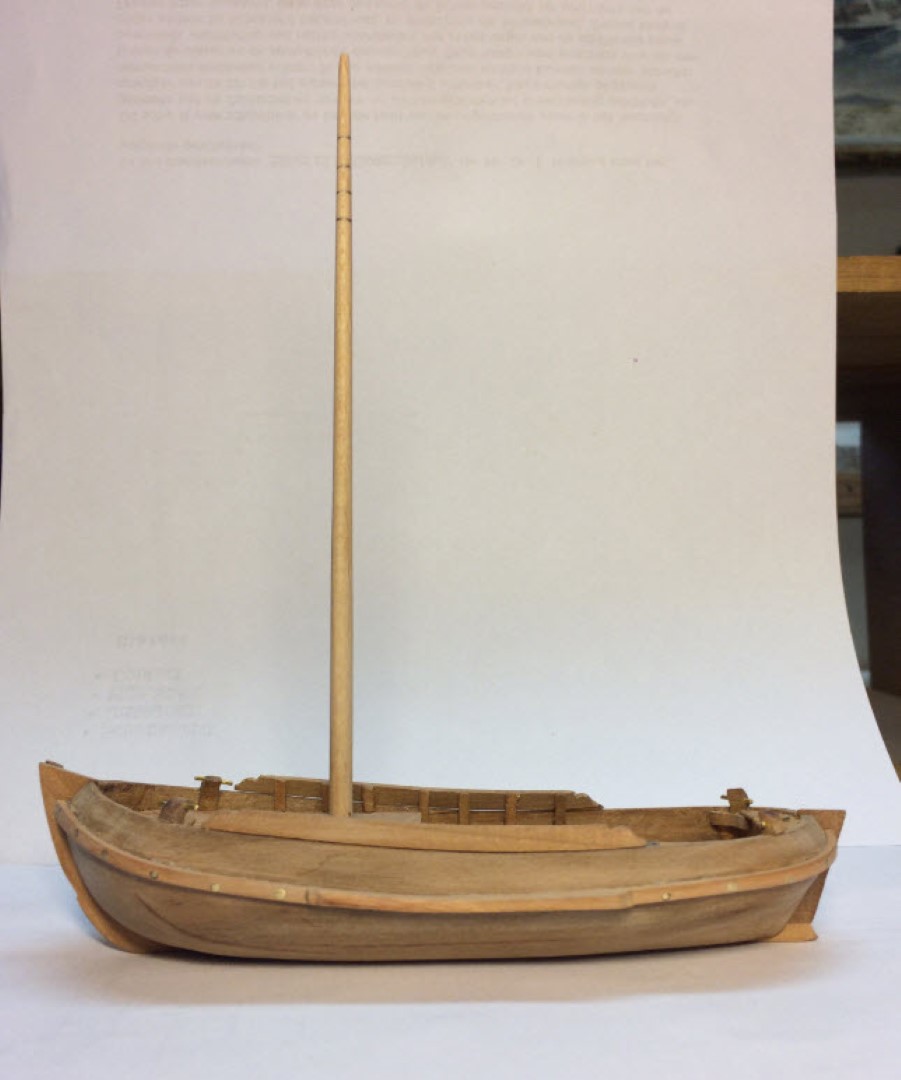 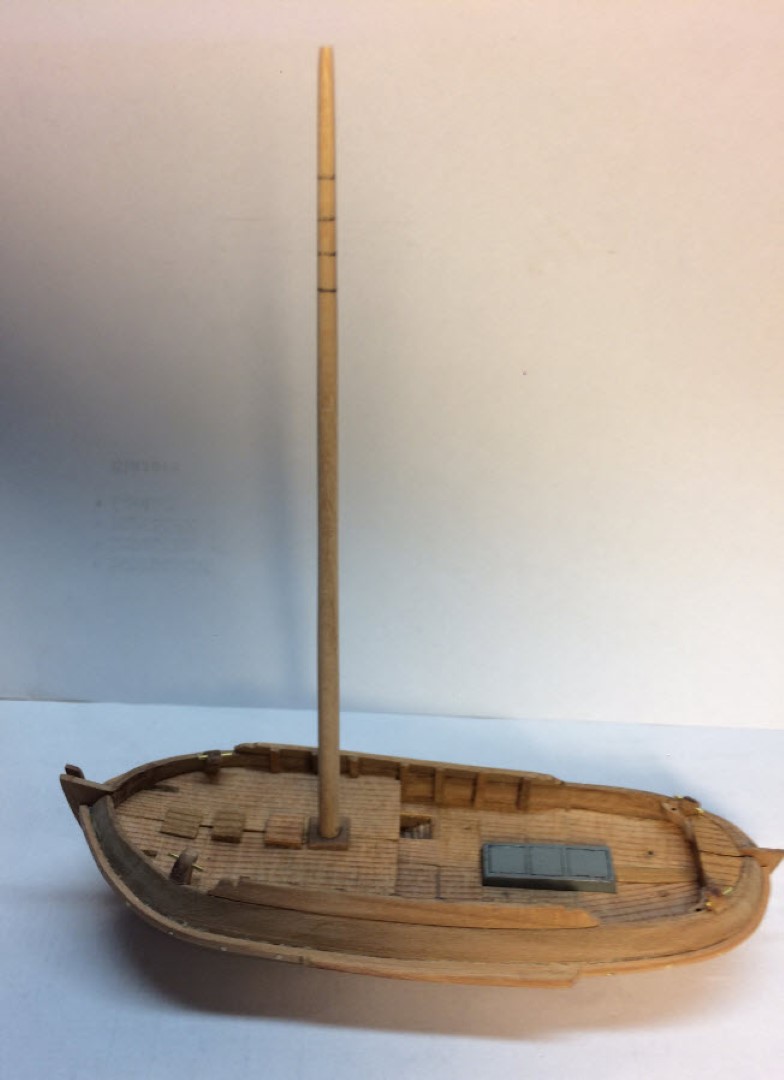 The fore and aft stem where put in small groove and the rudder is made whit irons on it. It works perfectly. The blazer is made whit 3 sails, the mainsail and 2 jib’s. When I made the holes in the bottle to fasten the hull on the glass whit 2 bolts the glass was broken. In my stock of glasses I found one whit de same bottleneck, 28 mm. But when I proved to put both parts into the bottle the starboard side did not go in. 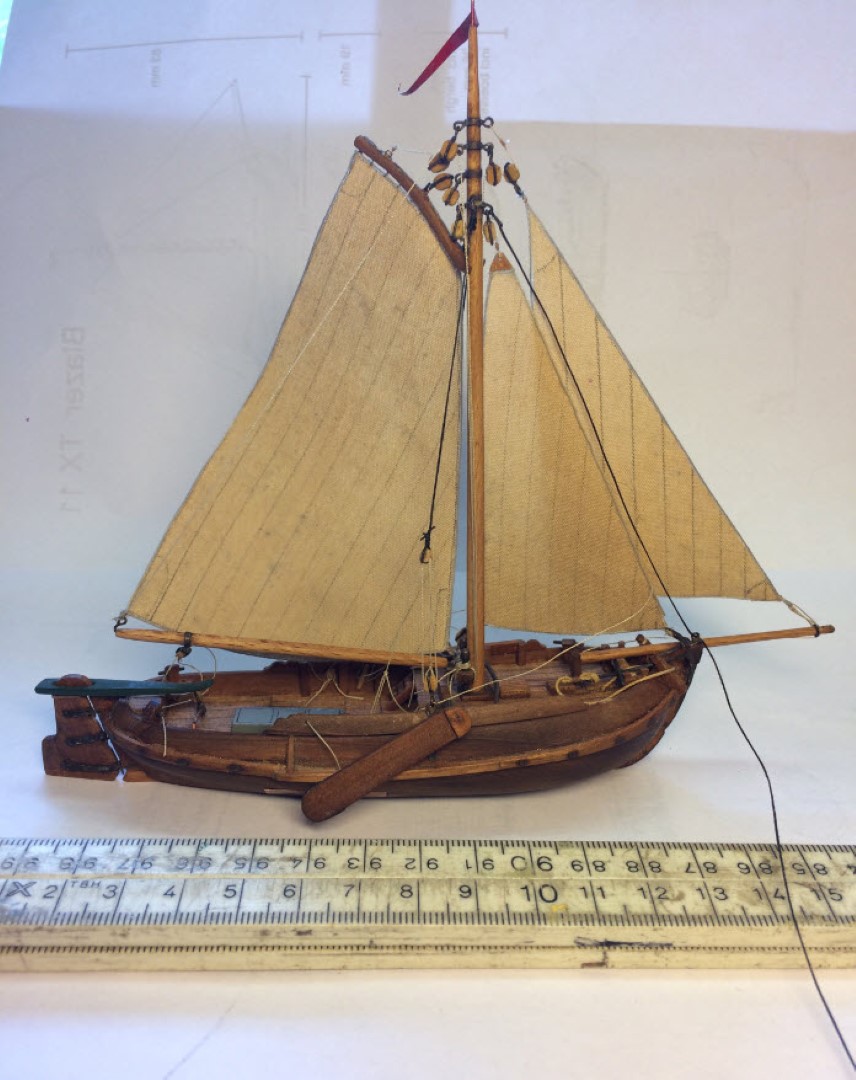 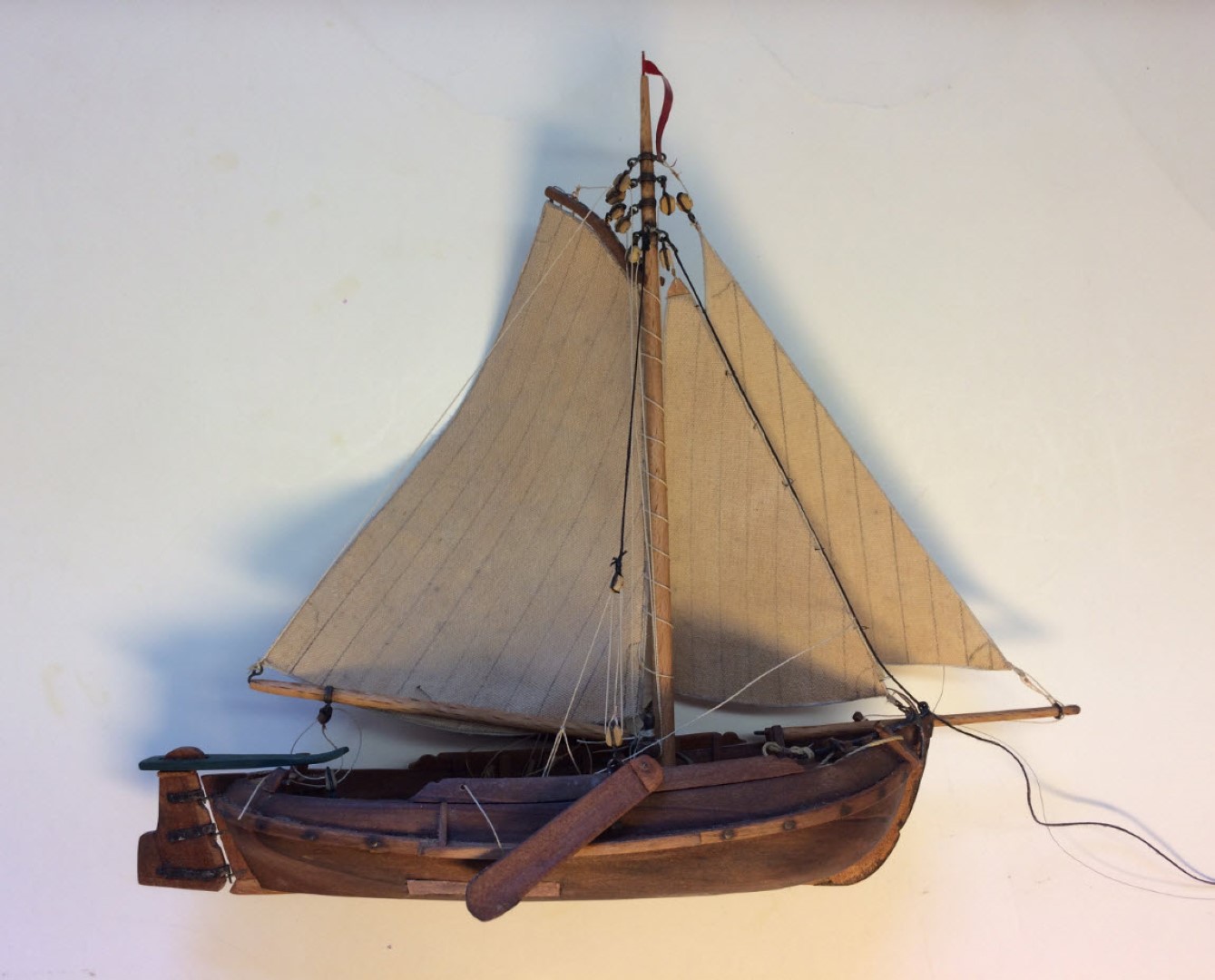 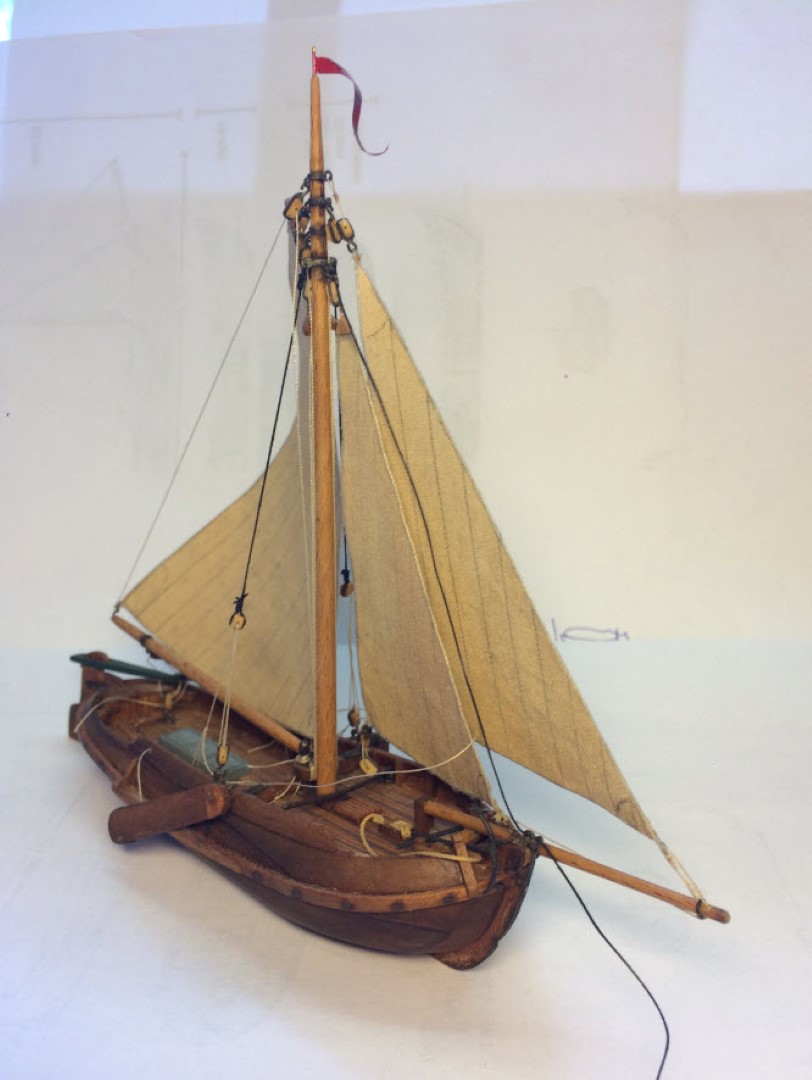 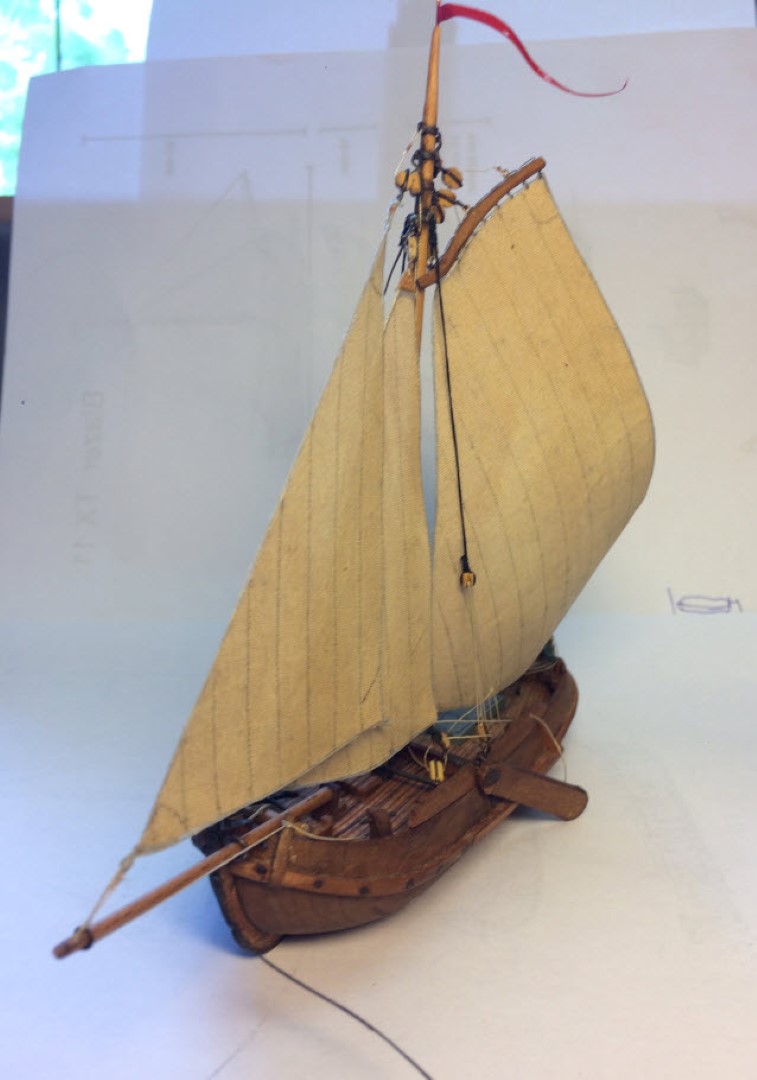 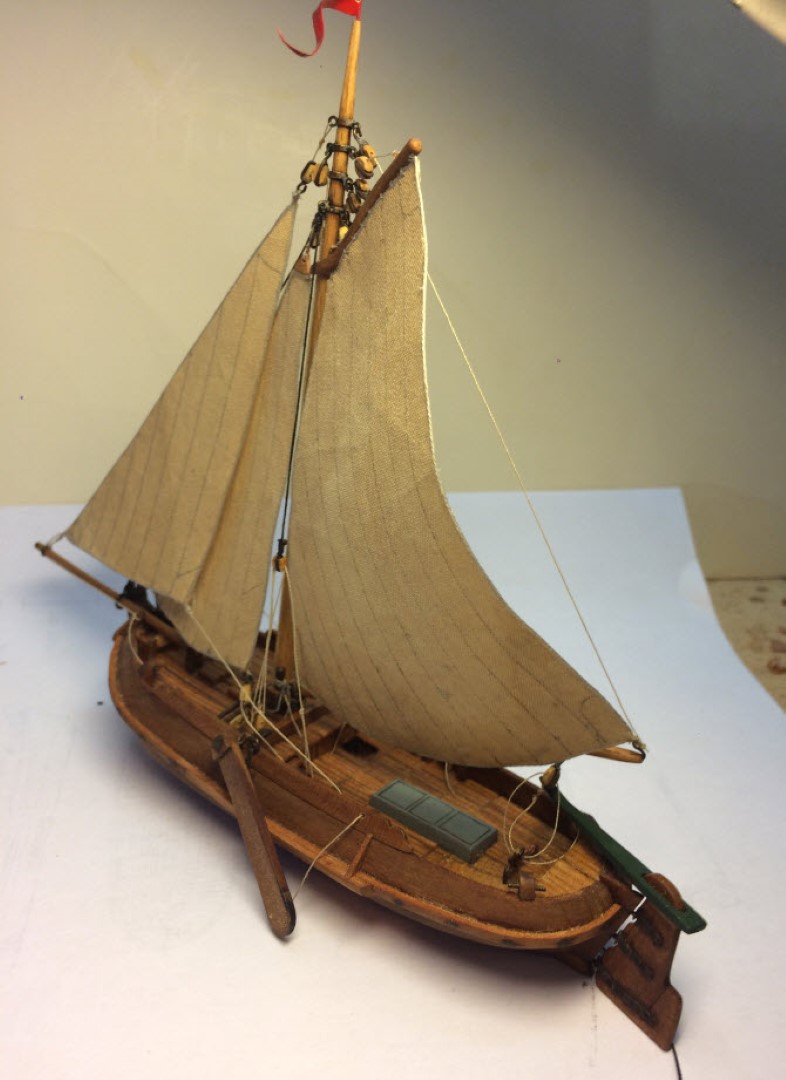 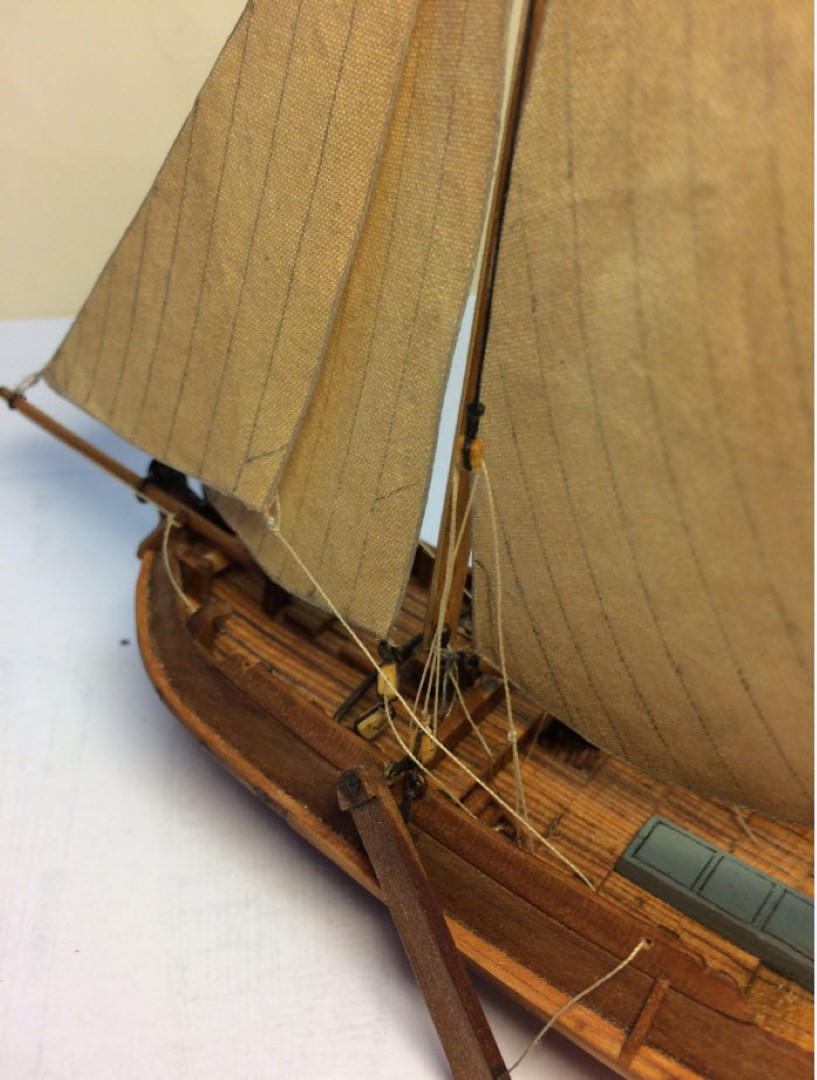 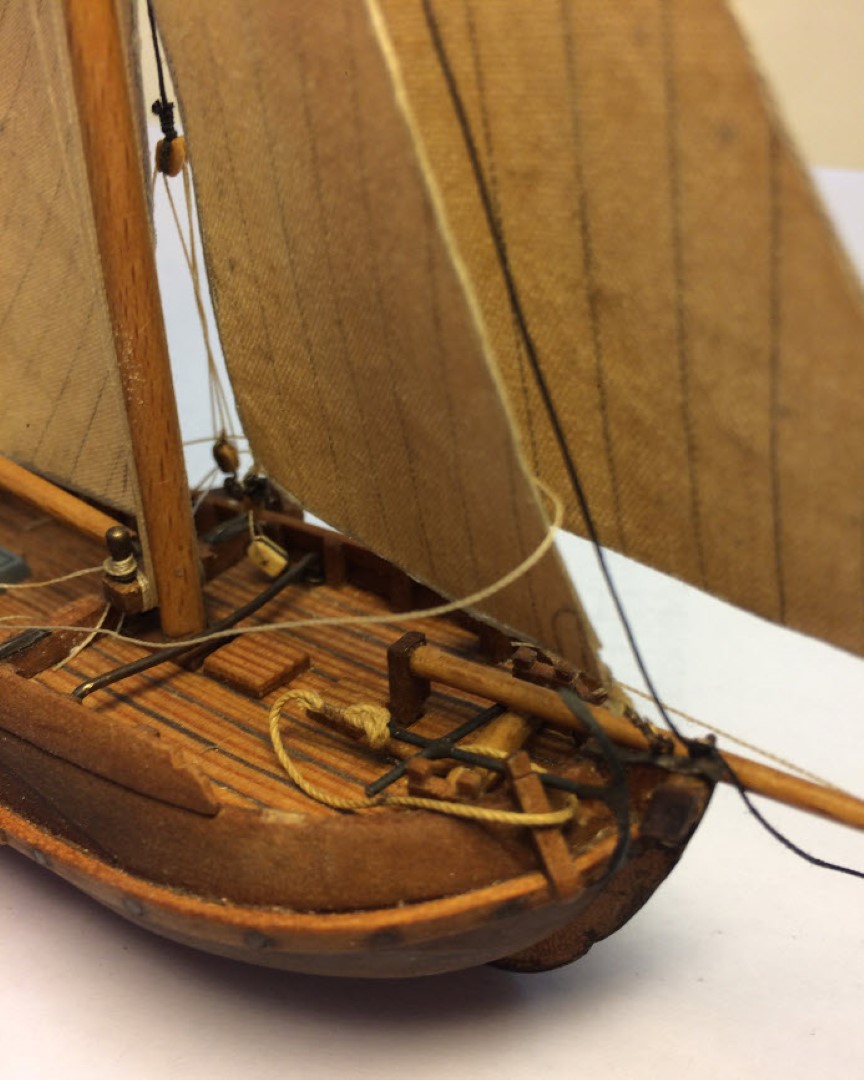 The inside of the bottle was different from the one that was broken. I had to break out one of the bitt’s on the starboard side and had to glue it to gather later on. When everything was put into the bottle (portside first and starboard side second, the ware hold together with ropes of the rigging) the starboard side had to turn on in the bottle. Then something went wrong. I think (I am not sure) the bowsprit was turned over. The result? Both jibs were disarranged. I had to work a lot INSIDE the bottle to make everything as I had planned. During this working IN THE BOTTLE the mainsheet was going out of the blocks. It has cost me 2 full days of hard working to put it well again. But the result is OK. One problem I did not salved. Both staging’s are turned when I put the mast into the hole. I don’t why  but there was some tension on the staging. 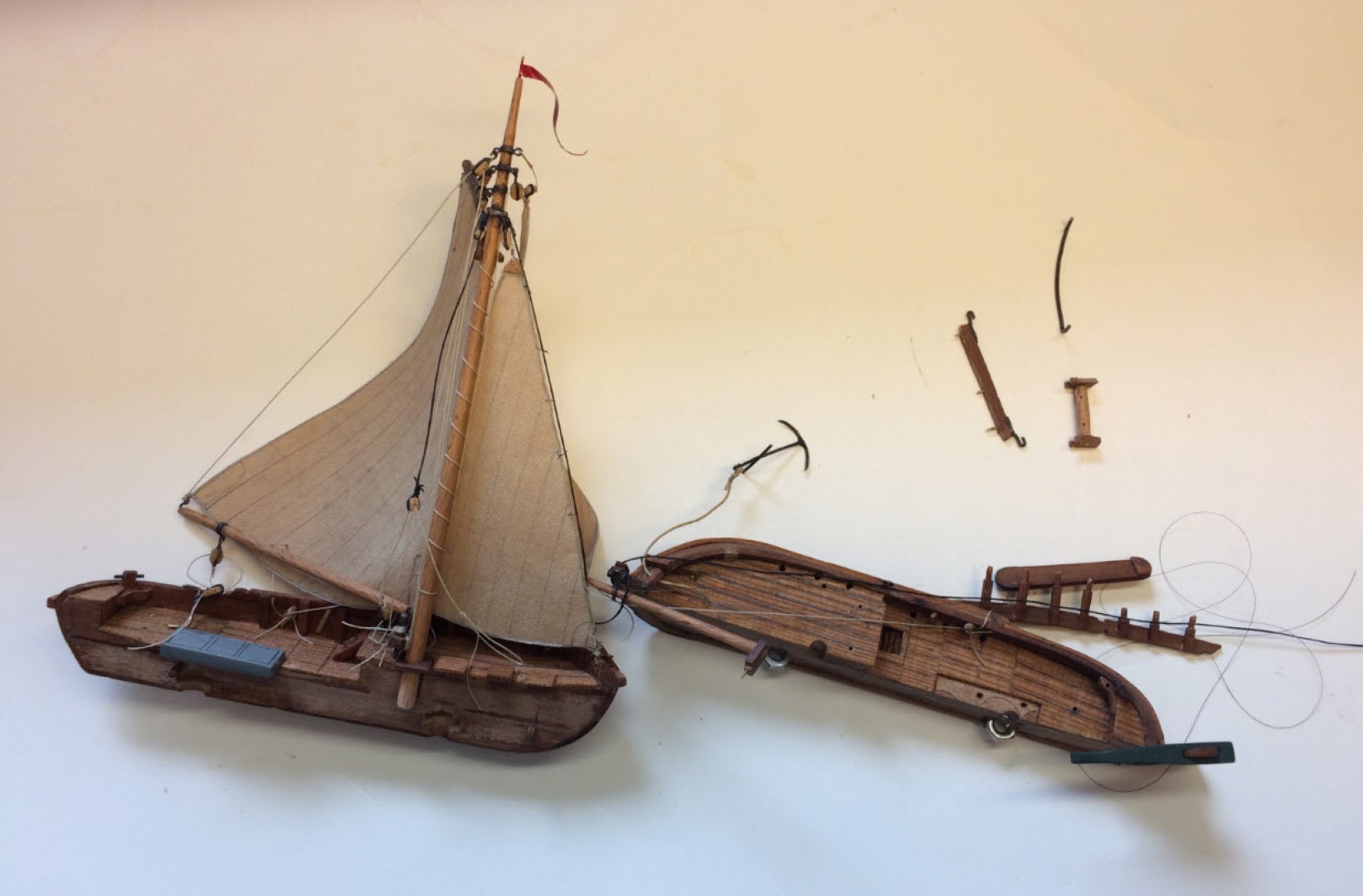 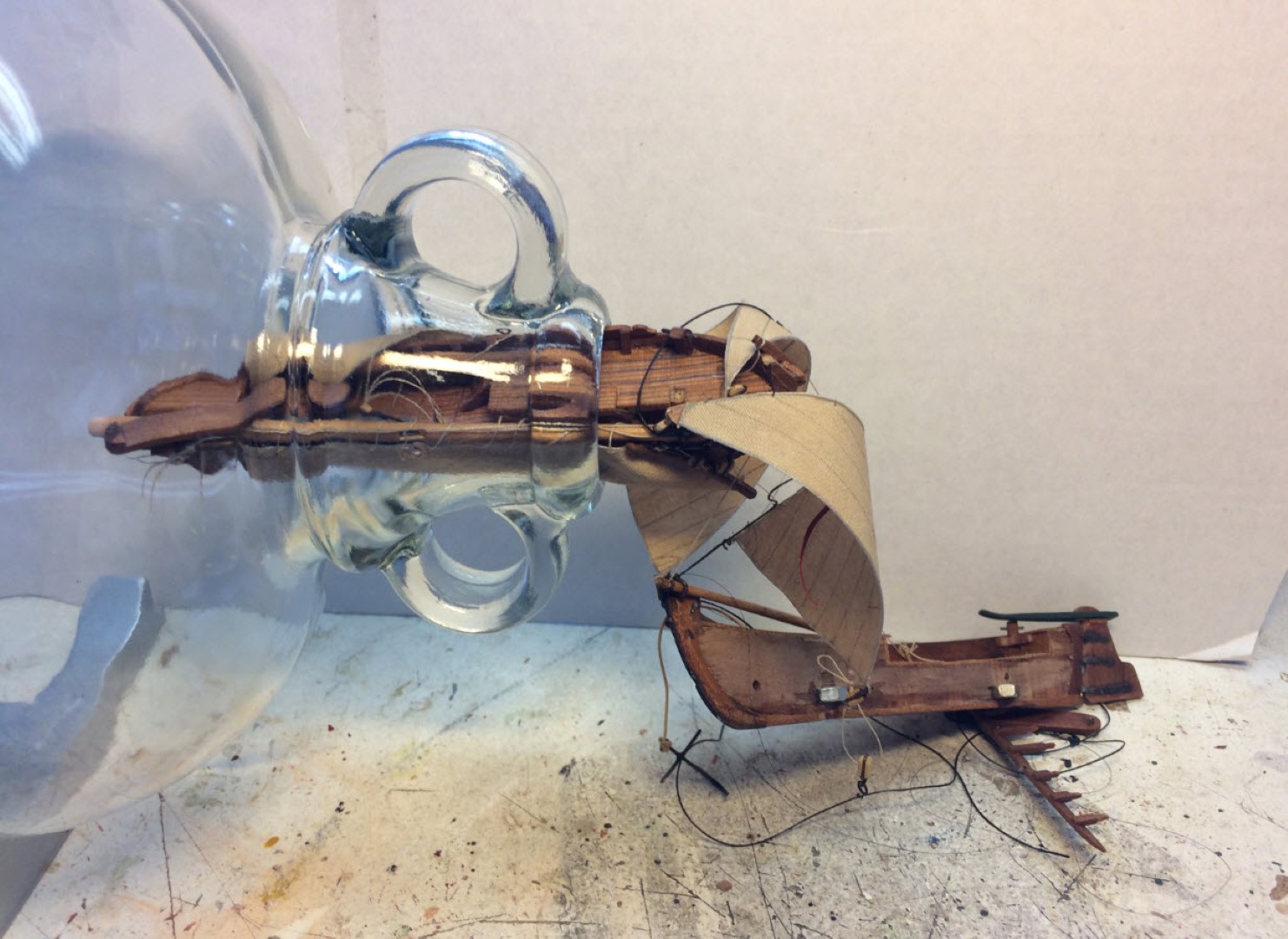 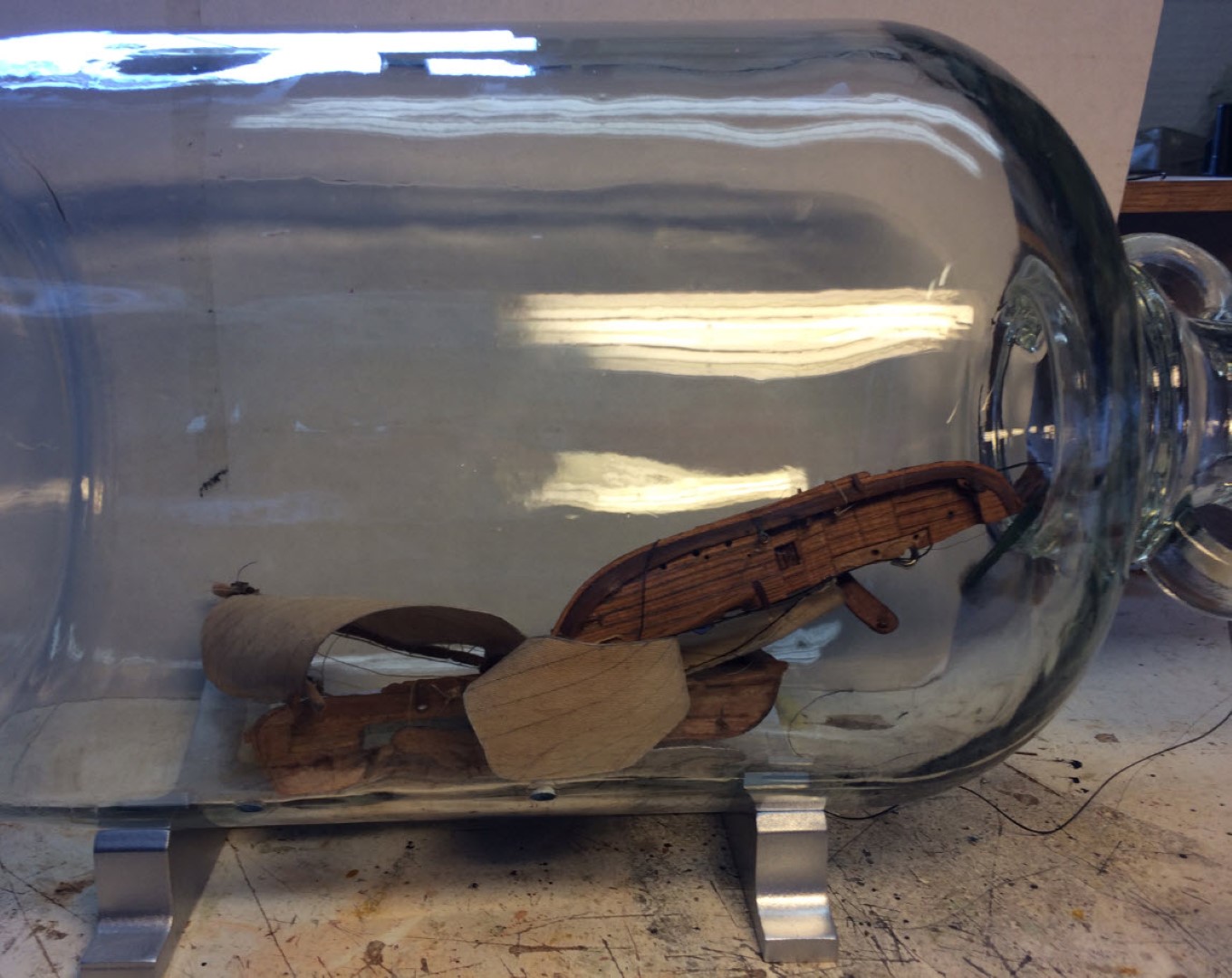 After all I am satisfied whit the blazer." 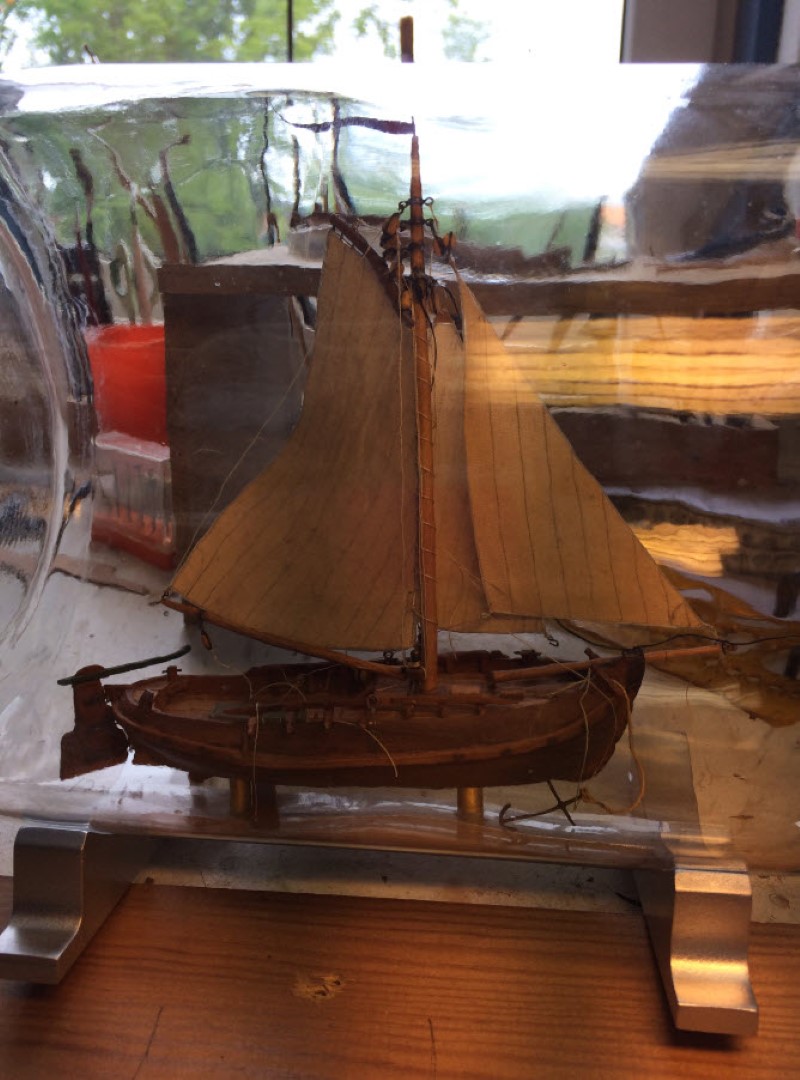 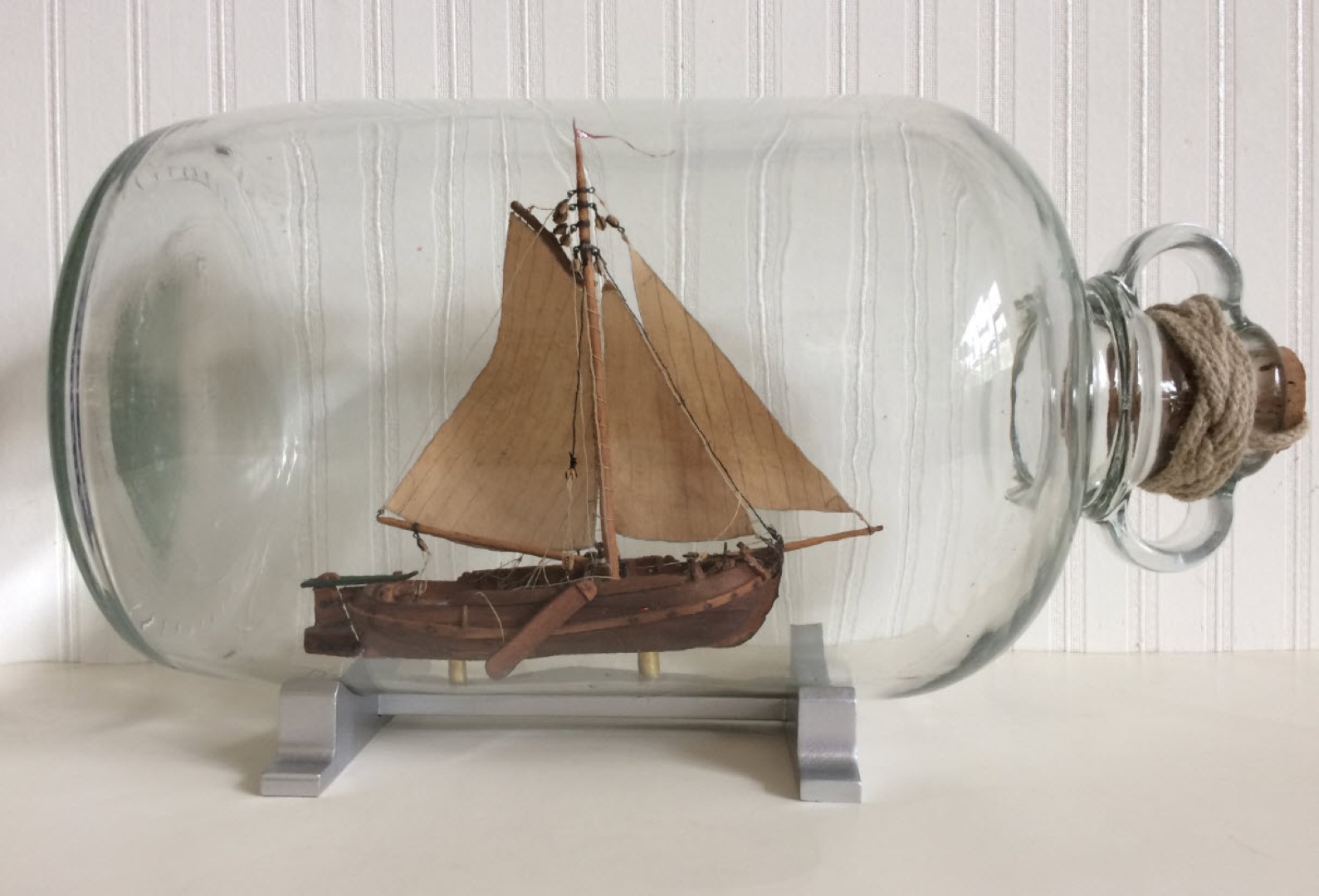 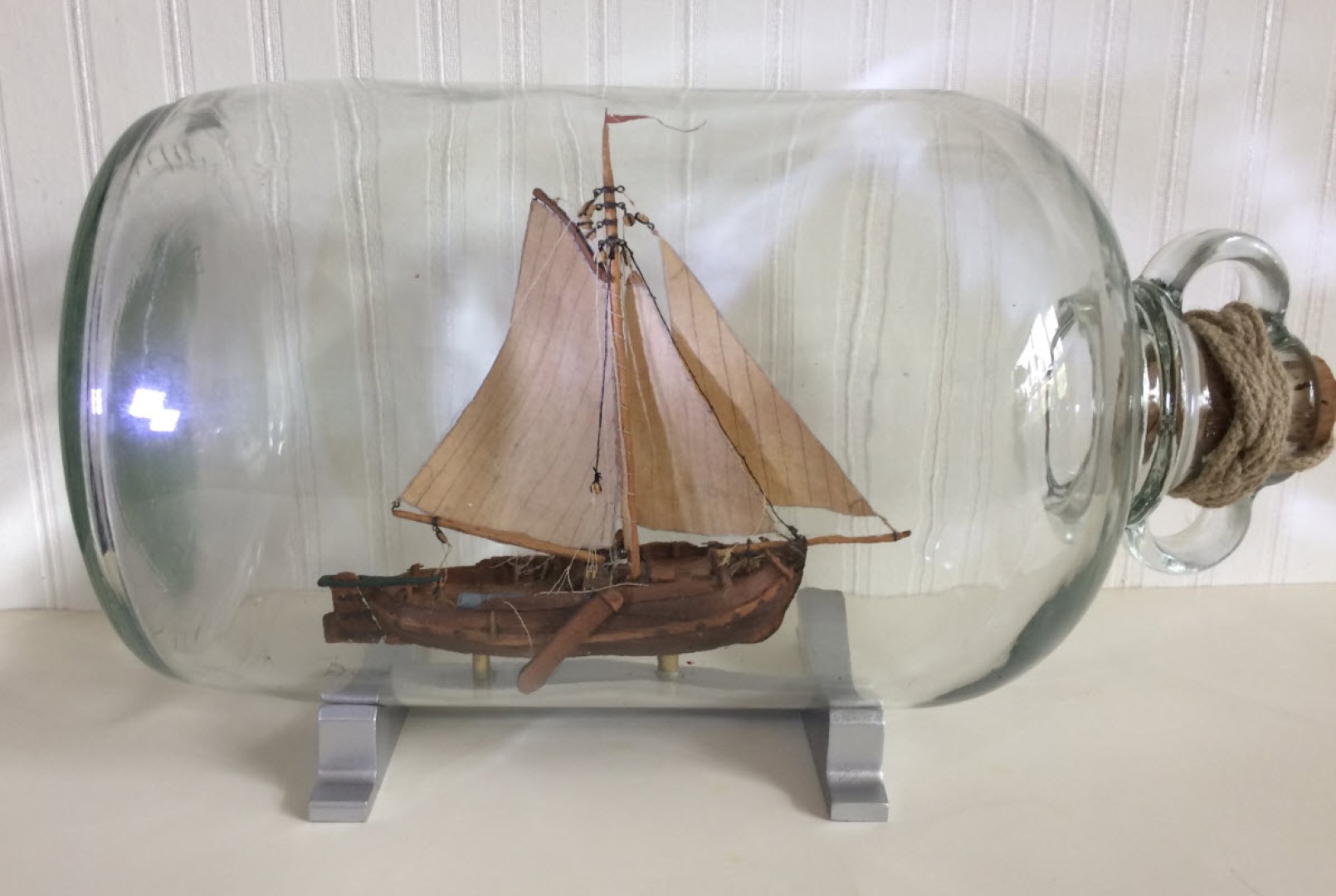 Under the bottle stand is a little handmade wooden box. When you open the custome box you will find wooden carvings. There is a seal, eel, codfish, haddock, common sole, flatfish, shrimp, shellfish, and a ray. The fish are made from apple and walnut woods. The black flatfish is made from oak. That wood used for the carvings is from a ship from de United East India Company (V.O.C.), built in 1729 and it sunk in 1735 when it was sailing out of Vlissingen. When it sunk all the inhabitants of the ship (256) were lost. In 1982 a English wreck diver saved the gold and silver and some parts of the hull. I had the opportunity to get a few smallparts of the wood. - Frans 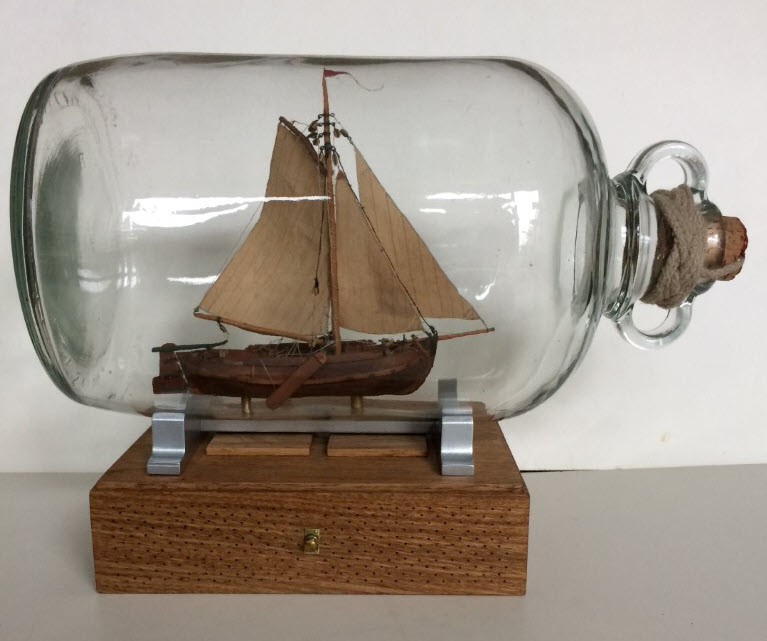 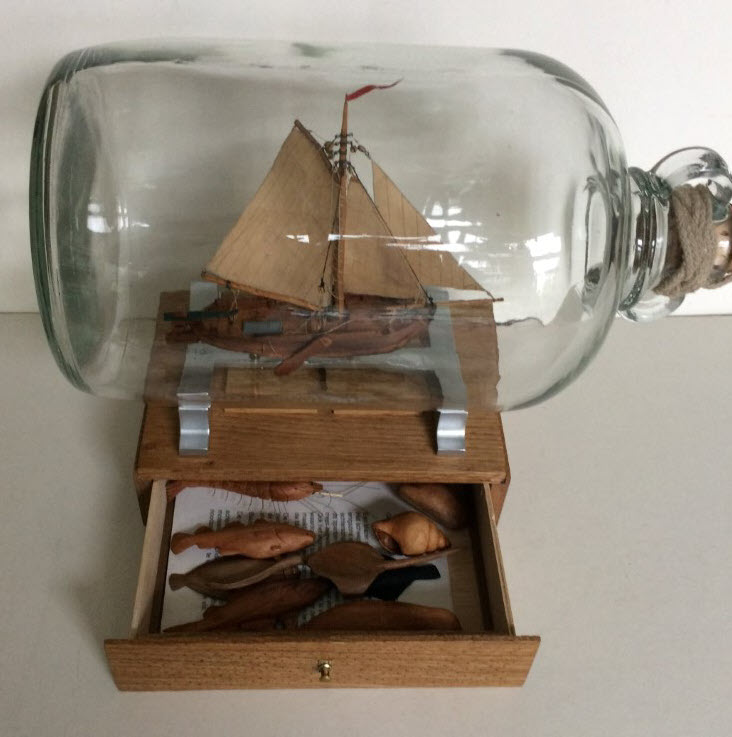 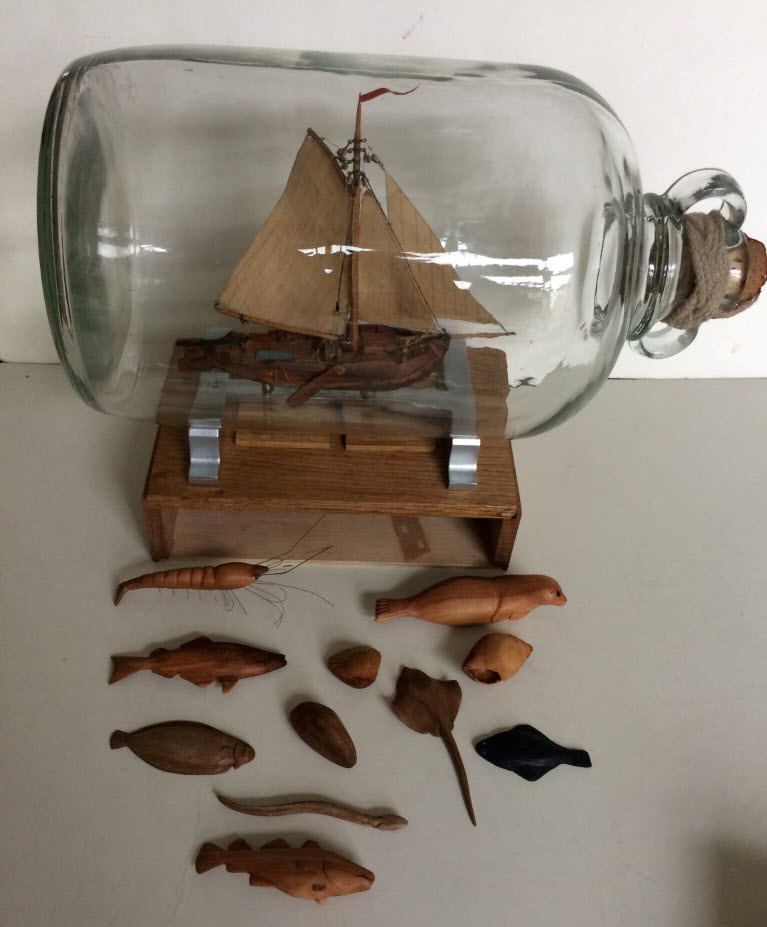