Mould Model in a bottle - by Frans Dekker

Mould Model in a bottle - by Frans Dekker

Mould Model in a Bottle

Years ago I visited  one of our National Maritime Museums in Holland. A model caught my eye. I was very interested in it.

I knew from that moment it would be no easy job. I started to make a massive half model of what I have in mind. 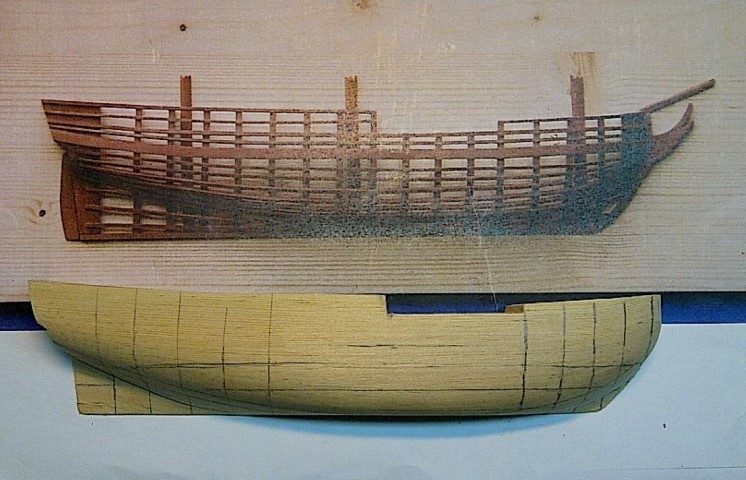 I made a “platform” in the bottle where I  was able to put the model on.

The first parts of the model where the fore and aft stem and the keel/seed wood and 3 masts and bowsprit. By that time the contours were visible.  One other part was the bulwarks.  Then I started to make some curves in de massive half model  where I was able to put the rafters (2 x 1,5 mm) in the right position.  After the rafters were in the right shape (with a little help of steam) I drilled holes of 0.8 mm  at the top end, corresponding with the hole’s I drilled in the bulwarks. The bulwarks as well as the rafters were made in their position whit the help of steam.  It is very easy to made a part of peer wood, held above steam, in almost every position you wanted. 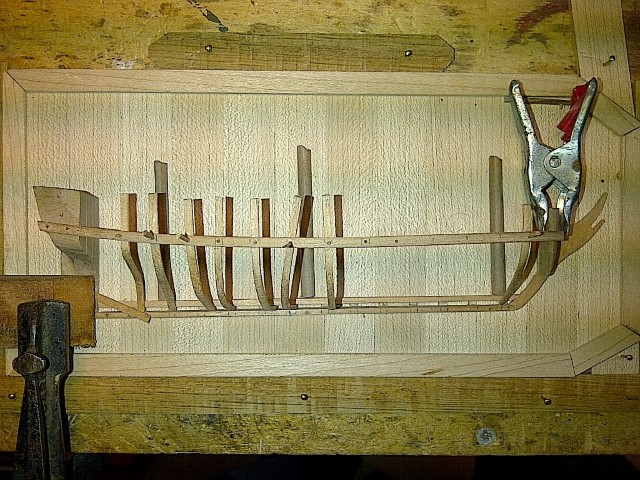 After I put the “platform” into the bottle I fasted the fore and aft stem and the keel to the platform with little pins. Then I put the rafters in the right position in the bottle and also fastened them with little pins, about 0,8 mm and some wood glue on to the bulwarks. That was the” easy” part of the SIB. 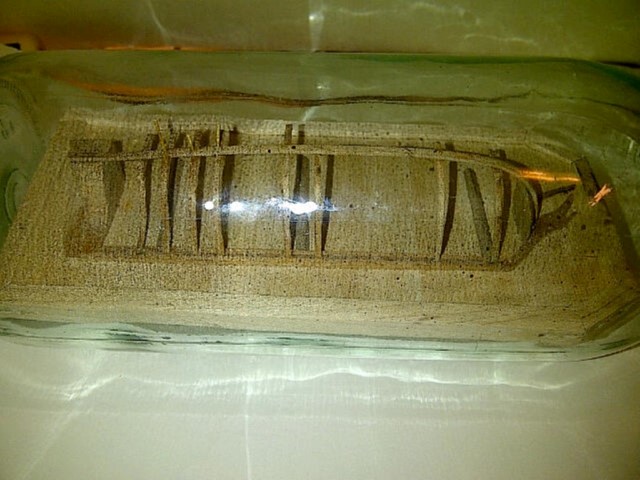 It was time to put in the, what we call, the “senten”.  I do not know the English word for that part. They  are the horizontal parts (1 x 1 mm) that give some shape to the model.  The problem was, how to fasten them  to the rafters. Therefore I came up with  a solution.  With  a thin iron wire I put a thread into the bottle with on the end a small noose.  The position of the thread was on the inner side of the model  and came “out” behind one of the rafters.   I put in 4, 5 or 6 threads and then I put in a “sent”,  trough the noose of the treads’.  One of the mayor problems was that the threads must not move back at the moment I pull out the thin iron wire. Sometimes it worked at the first time and sometimes I fixed it after  30 attempts.  ( 13 rafters and 10 senten !!!!!!!!!!!) 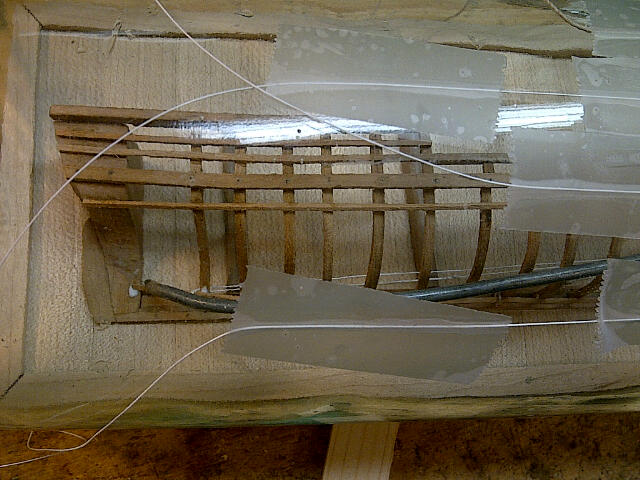 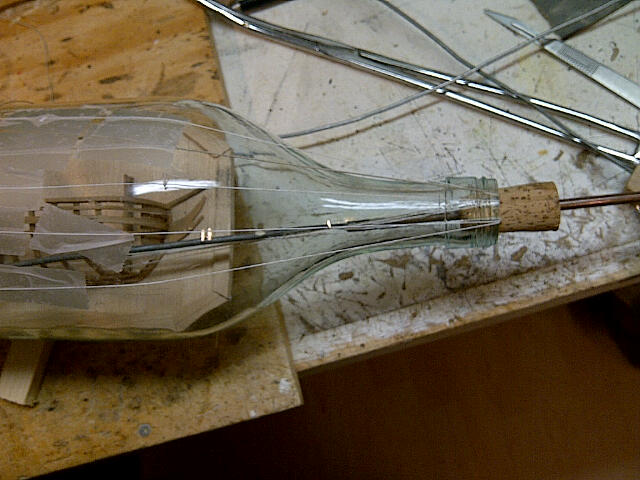 It was not possible to make the “senten” at the right length and shape before I put them for the first time inside the bottle. At the end  of the sent I put some dashes so I could see how long it had to be. After that I had to pull it out again and put the modified  sent  in again (with the same problems). 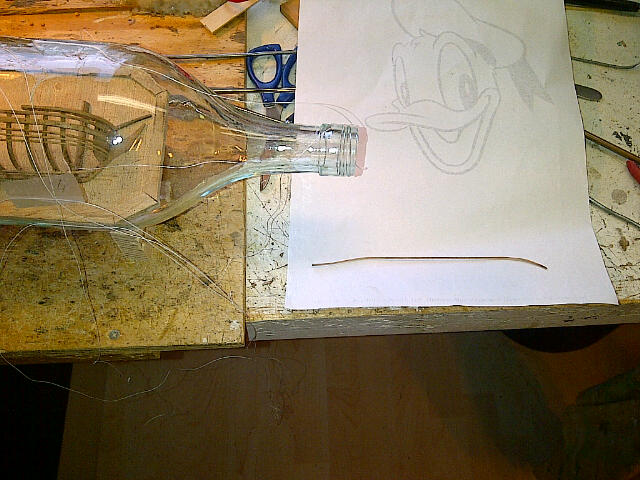 When the “sent” was in position again I put a little drop of glue on every rafter . In total I had to put in about 200 small drops of glue. ( I think you could imagine how many drops “missed”  the rafters and attached to the inner side of the bottle.) When I pulled at the threads, the senten were pushed at the rafters and when they were in the right position,  I put the threads with adhesive tape at the outside of the bottle. 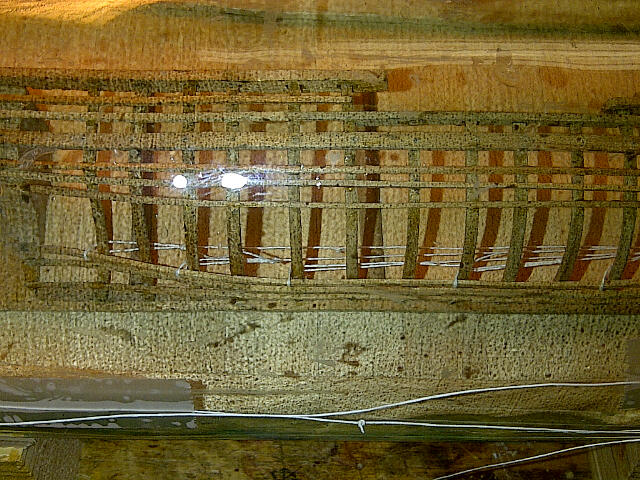 After the glue was dry I used a very sharp part of a scalpel at the end of a iron wire. I had to put it into to the bottle and cut the treads by the noose.

I am happy with the result. 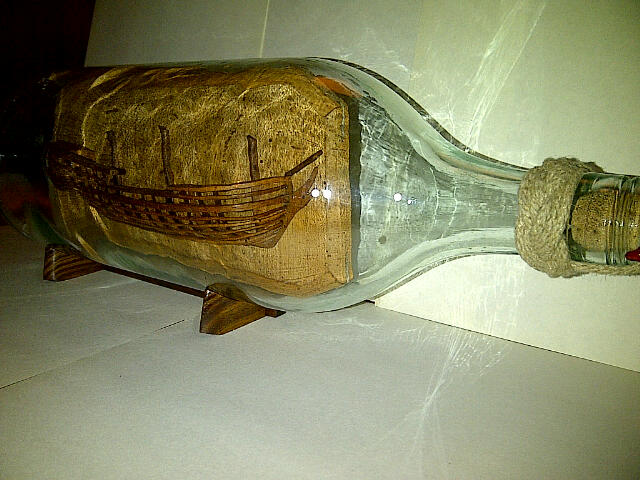