All I know about a cello, never ever having been close to one, that it is too big to tuck under the chin to play and too small to play without sitting down. But having a friend who plays one and having found a suitable bottle, a table vinegar cruet, I thought it would be nice to put a cello in the bottle for my friend who was away at college. In order to help provide a mix of mail to keep dust from settling in the bottom of her mail box I created a cartoon character entitled THE MELLOW CELL0 FELLOW which I send along with greetings from home from time to time. This Cello Fellow does pretty much what I want him to and reports are that he is welcome on campus.
My "CELLO FELLOW'S CELLO" is a cartoon instrument so I decided that my cello in a bottle would also be a cartoon. In place of the regular scroll and key box at the top of the fingerboard I have a three fingered cartoon hand delicately holding the strings between the thumb and fingers with the ends exposed. One of my instrument strings is broken and flying loose. The strings of the bow are fastened at the near end and flying loose at the far end and the "F" holes (so called because they resemble a lower case letter f) in the top of body of my instrument are dollar ($) signs. On my cartoon cello I have drawn a patch, a kind of trademark of mine. 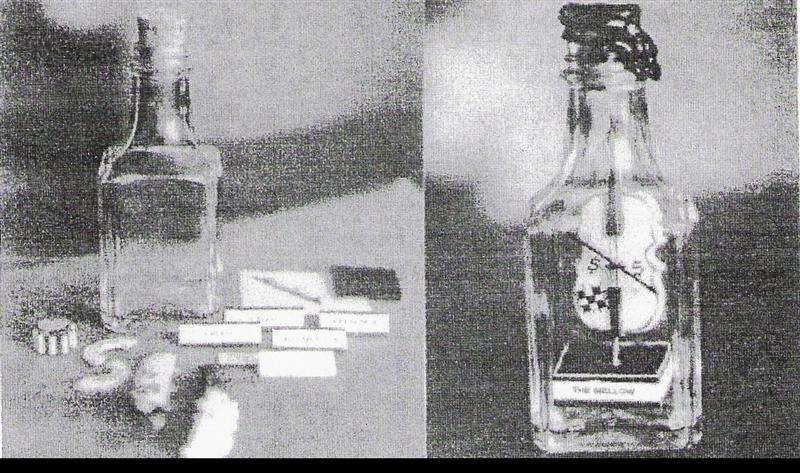