While visiting his mother in his home town of Fordingbridge, on the edge of the new Forest in Southern England , Alan Rogers took some time to visit the new local museum. While there, he was shown a picture and a couple of articles from local newspaper clippings relating to the Steam Trawler “ Kingston Chrysolite.” 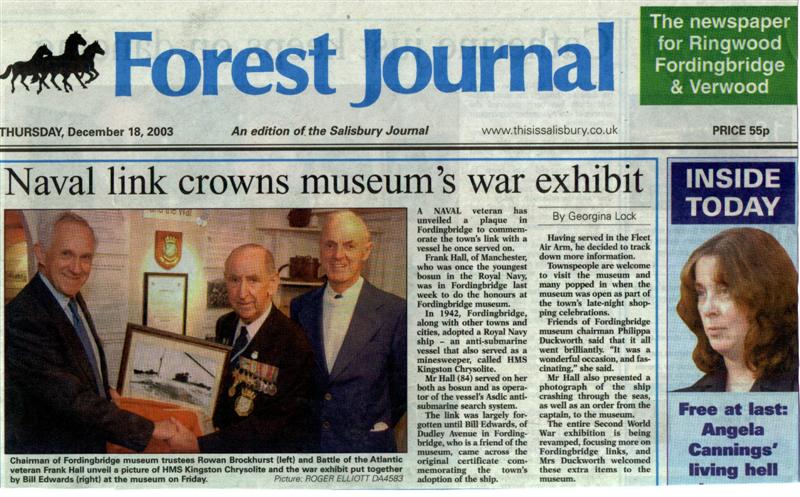 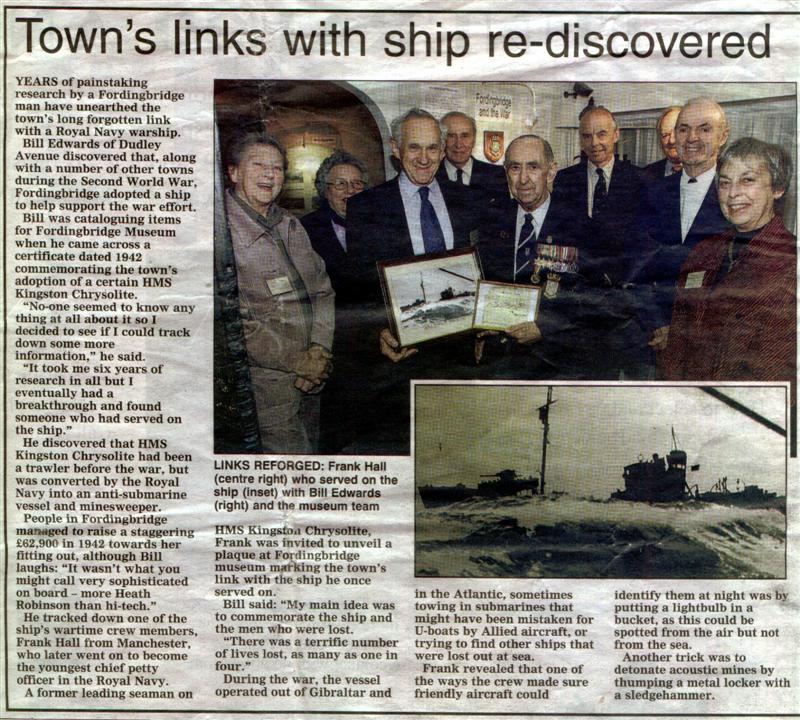 The account goes that during World War II a huge ship-building program was organised to counter the enormous number of losses of warships in England. To address this, a week was designated ‘Warship Week’ and many activities took place to collect funds to help cover some of the cost of these warships. Although many citizens could hardly afford to help; they gave and not begrudgingly. Fordingbridge, with a population of around 3500 in 1942, responded magnificently with a total of £62900 (worth probably in excess of £1 million today!) The local newspaper reported that this was “£900 in excess of the objective, the amount required for the provision of a trawler-minesweeper.” Thus the Kingston Chrysolite became the ‘town’s warship’. In recognition of the money raised, the Admiralty allowed the communities to `adopt' a warship and presented the town a shield or certificate to commemorate Warship Week.

Background and History of the Kingston Chrysolite

“I joined the Kingston Chrysolite in the spring of 1942. She had been in Gibralta since 1940. We did ‘odd jobs’, patrolling the Straits, convoy work, not down the Med. But going out several miles into the Atlantic awaiting for one of our subs to surface, to lead them to the ‘Rock’, otherwise the RAF might have been ‘bomb happy’. We were in the North African invasion against the French at Oran: We were ‘back-up’ twelve hours behind the main ships. Two shells did make a splash about fifty yards away.We left Gibralta at the end of June 1943 in a large convoy: We were on the port quarter but only for one day as one of the merchant ships broke down and we had the job of finding her and protecting her. She was that slow, it took us 14 days to reach Loch Ewe ( the second largest deep water anchorage in Great Britain.) After taking on stores, it was away again for Grimsby to pay off. The Chrysolite had another full complement for 2 years after that.” - H.K. Barnsley, Halesowen, West Midlands
“When I joined her in Birkenhead in August 1943, the Kingston Chrysolite had undergone a major refit. New RADAR had been bolted to deck and an ASDIC dome attached to her bottom. We carried out sea exercises at Aberdeen then sailed back to Gibraltar to resume patrols and escort duties. An added patrol at this period was carried out at night to discourage divers from attaching limpet mines to British merchant ships lying in the anchorage. A daily coded signal was received advising us of thevariable time for the dropping of a depth charge. The effect of which was lethal to anyone below the surface. Generally, we escorted single vessels; usually tankers from nearby ports like Heulva in Spain and Casablanca in Morocco, and of course we would escort any stragglers. On one occasion we shepherded a cable ship for several days in mid-Atlantic, steaming round giving ASDIC protection while she grappled for the cable on the sea bed and effected repairs. Towards the end of the war we were sent to the Azores to take up relief escort duties. We finally returned to Falmouth shortly after VE Day, 8th May 1945.” - Dick Hickinbotham, who now lives in Perth, Western Australia.
"During the war the vessel operated out of Gibralta and in the Atlantic, sometimes towing in submarines that might have been mistaken for U-boats by Allied aircraft or trying to find other ships lost out at sea. One of the ways we made sure that friendly aircraft could identify us at night was by putting a light bulb in a bucket, as this could be spotted from the air but not from the sea. Another trick was to detonate acoustic mines by thumping a metal locker with a sledgehammer. "  - Frank Hall, now 84, served as bosun and operator of the vessel's Asdic anti-submarine search system. He was once the youngest Chief Petty Officer in the Royal Navy.
Using the reference book “Cook, Welton & Gemmell Shipbuilders of Hull and Beverley” by Michael Thompson, published by Hutton Press, ISBN 1 902709 02 0, Alan was able to see plans, drawings and pictures of similar trawlers to the Kingston Chrysolite. With these  pictures and plans, and with a photo of the actual ship as his guide, Alan was able to build the Kinston Chrysolite in a bottle for the museum. It was “launched” in a large two litre gin bottle.”
Click on a picture to enlarge