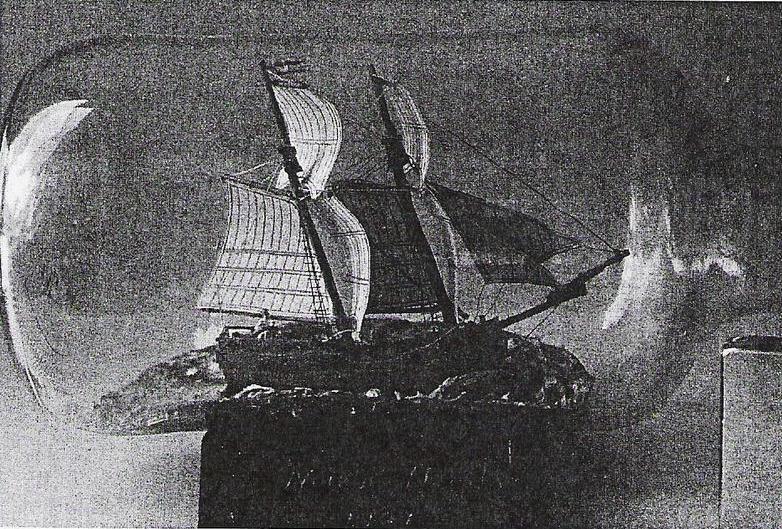 Two masts, each rigged with gaff sails, come to mind when I hear the word schooner. But a client had prefixed that with "colonial:” and advised that he desired all sails to be set, including studding sails. He specifically mentioned Sultana, Chaleur, Halifax, and Marble Head, which set me on a stint of looking and reading. I already had The History of American Sailing Ships by Howard 1. Chapelle, but it soon became dog­-eared from my rereading of the por­tions dealing with colonial schooners. From the Nautical Research Journal, I learned of and acquired The Colonial Schooner 1763-1775, by Harold M. Hahn, which proved to be exception­ally well researched and helpful.
Colonial schooners proved differ­ent from my initial image, as they usu­ally carried two or more sizeable square sails on each mast, as well as the gaff sails. Such clouds of sail must have been an impressive sight. But Mr. Hahn's research related that they fre­quently experienced loss of masts from being so overburdened with sails. He kindly replied to a personal letter, confirming that they were high­ly unlikely to have ever carried stud­ding sails. Both books contain good plans of several colonial schooners, and both pointed out that only the Admiralty plans for the Chaleur provided specifics on the sizes of masts and yards. Both included hull lines for Marble Head, but Mr. Hahn revealed that this was actually a class or type designation for two schooners which ultimately bore other names.
From Abe Taubman's commercial plan service, I obtained 114" = l' plans for the Sultana by Portia Takakjian and the Halifax by Dr. Franco Gay. The former provides good rigging details, but no sail plans. Dr. Gay's plans are exceptionally well done and include sail plans. Labeling on Dr. Gay's plan 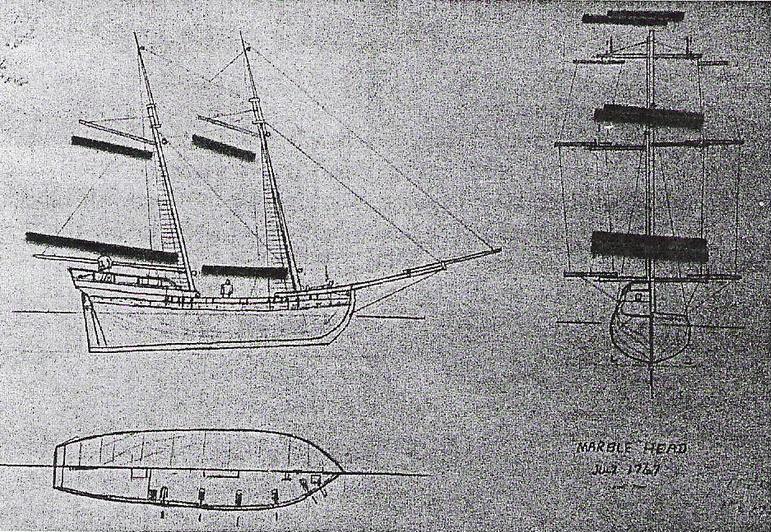 is in Italian, but I did not find that troublesome. What I did find troublesome was the wide variation of boom and yard sizes among the books and plans. As suggested in one book, I attempted percentages of the Chaleur figures based on the ratio of the hull lengths. That resulted in the foremast mains'l boom being too long to pass between the masts, which seemed unlikely. (The book did wisely follow the sug­gestion with a statement that such fig­ures should not be regarded as absolute.) I adjusted the figures to what seemed reasonable and omitted the studdingsails, although I had included those on my first draft plans.
The bottle I selected was 1.75 liters. The best scale to fit the bottle worked out to 1:210 (1" = 17.5'), so I prepared plans to that scale. Although it seemed fictional, I also opted to usethe Marble Head name. The client desired a fancily carved base for the bottle and I tried that, but found my talents and abilities did not lie in that area. Instead, I fabricated a base from four interlocking strips rip sawed from a slab of finely cured wal­nut. The walnut was so attractive that I decided to use much of that in the model. The name and particulars were carved into the side strips of the stand, the strips assembled with car­penters' glue, and the stand affixed to the bottle with silicone glue. My slab of walnut happened to be 1.2" (3 cm) thick. A square piece sawed from that was used for carving the hull to slightly below the waterline. Several thin pieces were also sawed from the walnut for carving other items such as the masts, spars, etc. A few strips were so thin as to be translucent.
As many details as possible were carved into the hull, including the main deck bulwarks. Gunports were first drilled, then squared to shape using the sharpened tang of a small file. The same method was used to form the window openings in the stern, which were then filled with thinned white glue to simulate glass. Separate details shaped from the thin­ner pieces of walnut included the rud­der, tiller, binnacle cabinet, quarter­deck .rails, quarterdeck, booby hatch, pumps, gun carriages, catheads, wind­lass, forward bitt, booms, yards, masts, bowsprit, and chain wales. 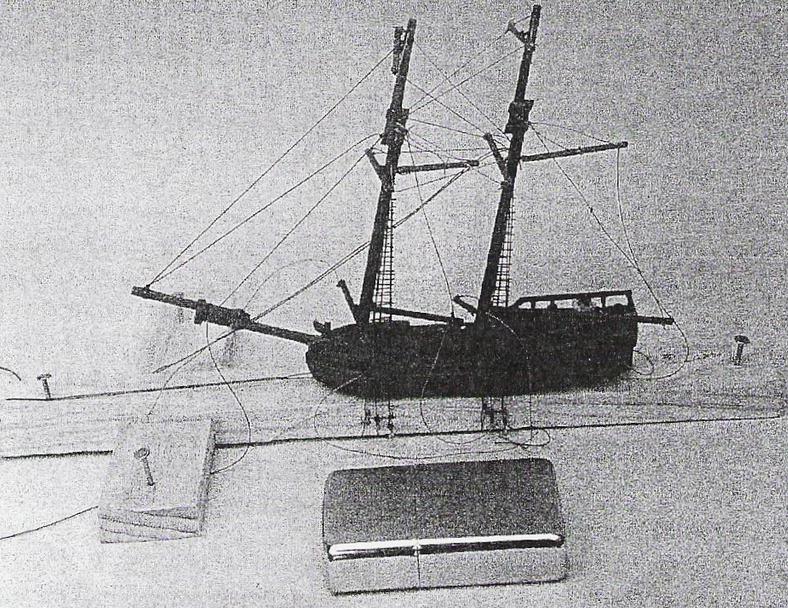 Topmasts were carved integrally with the lowermasts and with necked sections at their bases to match angled holes drilled into the hull. Many bot­tled models use hinged masts, but I elected to use stepped masts. Masts, yards, and bowsprits on bottled mod­els must be thicker than scale to with­stand the rigors of bottling. (There are some exceptions made by modelers who I regard as having truly infinite patience). It is also not usual for bot­tled models to have actual ratlines, but the methods used on this model facil­itated their inclusion, as well as the yard braces.
A helmsman was carved from a birch dowel and affixed to a hole on the quarterdeck and to the tiller. I neglected to factor his posture into his height so he came out about 20 per­cent over scale. Slivers of ebony were glued into each of eight gun carriages to simulate the four-pound guns. Although the ship has ten gunports, one source indicated that they rarely had more than eight guns.
The bowsprit and jib boom carving incorporated a small section of the foredeck, including the forward hatches, bitt, and windlass. A hole in this foredeck accepted the heel of the foremast, which then passed into a matching hole in the hull. Each chain wale slipped snugly into slots made in the side of the hull, per­mitting removal and reinstallation with their attached ratlines and shrouds.
A #71 drill (0.026” or 0.6 mm diameter) was used in a pin vise to drill holes in the masts, bowsprit, yards, booms, chain plates and foreward keel for the rigging threads. Black sewing thread was used for standing rigging and tan thread for the running rig­ging. Central holes in each yard and holes in the end of each boom were attached with black thread to form hinged joints with related holes in each mast. The tan thread was attached to holes in the yards and booms, reeved through suited holes in the masts, and tied through other holes in the yards and booms to simu­late lifts and braces. This still permit­- ted cockbi11ing of the yards. 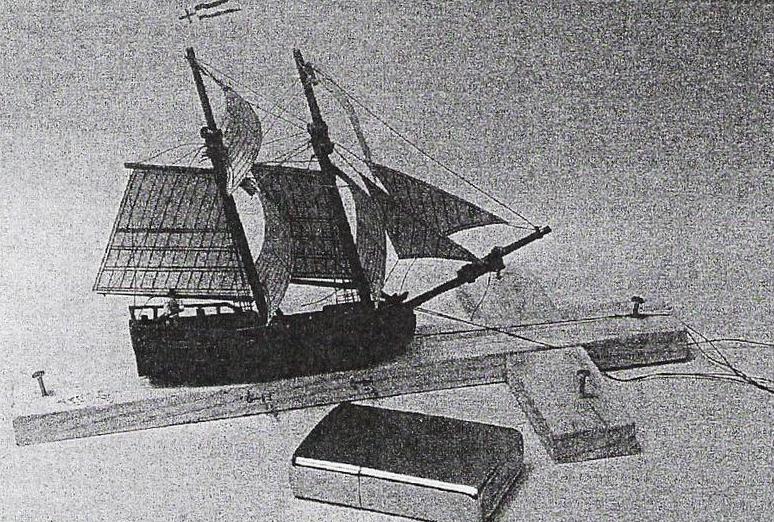 The hull was then screwed, on the underside, to a temporary rigging stand. Pins were driven into the sides of the stand at points which matched the holes in each chain wale. Three black threads were reeved through holes in each mast and the individual holes in each chain wale, then knotted and glued to the pins in the rigging stand. Glue-stiffened threads were next cut to length and glued to the shrouds with white glue to simulate the ratlines. Short lengths of thread were also glued inboard on each chain wale at the junction of the shrouds, along the tops and bottoms.
Measurements of the yards and booms were taken and used to make paper templates of each sail. When a good fit was achieved, the template was marked and later used to layout a tracing master on a sheet of white paper which included the seam lines. A homemade light table was used to trace the master template lines onto both sides of a piece of parchment-­like calligraphy paper. The two jibs were made to fold over the forestay lines, and a pennant to fold over the top of the mainmast. The pennant is also fictional, but developed from a couple of books on flags for ship models, which seems to be a field in itself. The tracing master was also used to develop the final plan accom­panying this article (figure 1). 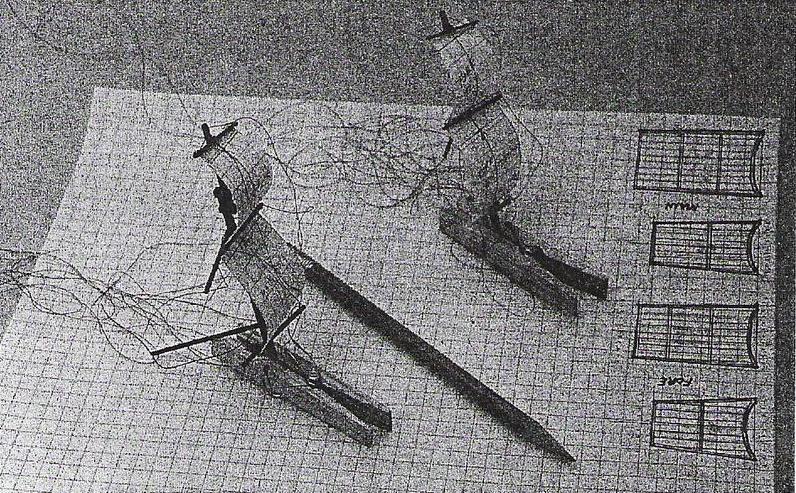 The sails were cut out, curled slight­1y around a dowel, and glued into place with white glue. Tan thread "sheets" were inserted in each jib before gluing their inboard corners. The squaresails were only glued along the upper yards, and the mainsails only along the gaffs. When all had dried, the shroud lines were cut from the rigging stand just below each chain wale, leaving short lengths to be glued later to the hull during bottling. The chain wales were pulled out of their slots in the hull and the masts and bowsprit lifted off as an entire assembly. The hull was unscrewed from the rigging stand.
A second hull was carved from pine to use for casting an impression in the sea material. Artists' acrylic gel was mixed with acrylic paint and troweled onto a piece of paper. The waxed pine hull was pressed into this. As the gel began to harden, waves and wakes were sculptured in the surface using toothpicks. After this set, white acrylic paint was applied along the wavetops and wake. The hull was removed from the rubber-like gel. Acrylic gloss medium was applied after all had dried.
This was my second experience with using acrylic gel for a sea materi­al. The prior time involved a bottle with a nice flat surface upon which to glue the sea. Theoretically, the gel can be rolled up, inserted into the bottle, and then unrolled into the white glue (which I'd applied by using a sipping straw as a pipette). In this case, the side edges of the gel kept curling away from the bottle and glue, defying my efforts to press it into place. Annoyed by this development, I used a bamboo skewer to pry the material loose and large forceps to roll it up and pull it out of the bottle, resulting in the need to reclean the bottle. After removing the glue, I scissored the gel-sea into an oval shape in hopes that it would cure the problem. It did relieve the problem some, but not as much as I wanted it to. On a subsequent model, I tried something which did seem to solve the problem of the gel-sea curling along the sides. I rolled a piece of aluminum flashing to match the curve of the inside diameter of the bottle and trow­eled the gel upon that. After the gel-sea had again been glued inside the bottle, white glue was applied to the depres­sion and the hull glued in place.
The rigged masts and bowsprit were next passed through the neck of the bottle, using care to only curl the sails. The mainmast was stepped, the bowsprit and foredeck placed into position, and the foremast coaxed into the holes in the foredeck and hull. Each channel wale was next glued into the slots on each side of the hull, working from stern to bow. Bent wire tools were used to arrange each sail, boom, and yard. The lower portions of each sail were glued to the lower booms and yards, followed by the sheets and braces. The martingale or bobstay was glued to the bowsprit.
It takes much less time in the telling than in the doing. After each item is glued into place, it's best to wait until the glue dries before proceeding to the next item. And there always seems to be some unanticipated problem to sort out and correct. The anchor on the gunwale is an example. Three times I attempted to carve that from ebony, but each was a failure. I finally made one from bits of styrene and painted it flat black. This was the last item to be glued into place. A Turk's-head knot was woven about the neck of the bottle and the threaded plastic cap was replaced with a cork. Per my log, this model required about 100 hours to make in forty days. 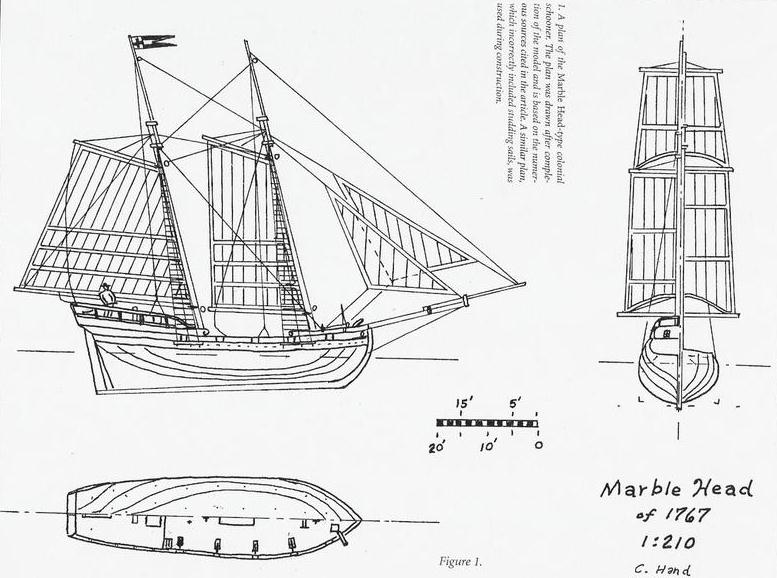 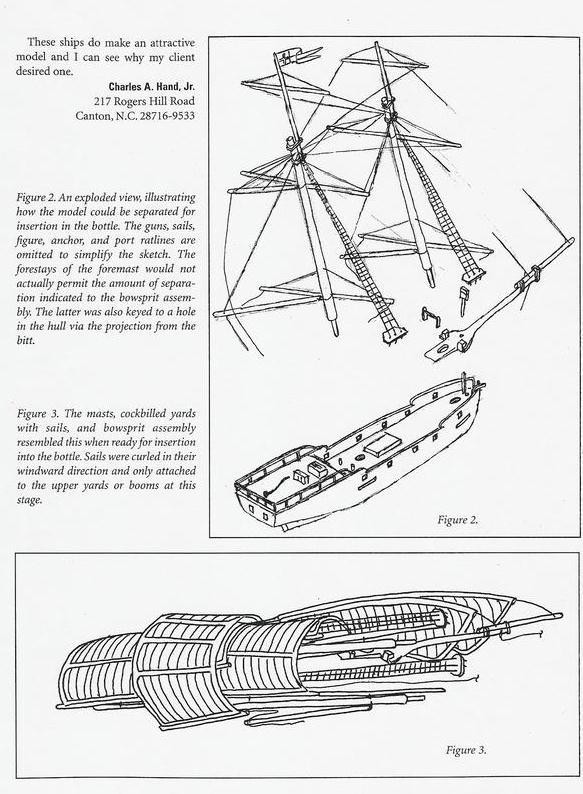