“Focus on collecting bottles of different shapes and styles and then creating an atmosphere of harmony between ship or scene and bottle shape.” So wrote our new member Heather Rogers, in The  Bottle Shipwright, the journal of the Ships-in-Bottles Association of America said,

My daughter-in-law had given me two of her perfume bottles last year, hinting that perhaps I might find a leaf or something to put in one for her and the shape of the bottle immediately reminded me of those curved lateen sails of sailing craft from the Mediterranean and the Middle East. However, the choice was an easy one since my good friend David Luna de Carvalho from Portugal and I had spent a wonderful afternoon a few years ago wandering about among the  boat building yards 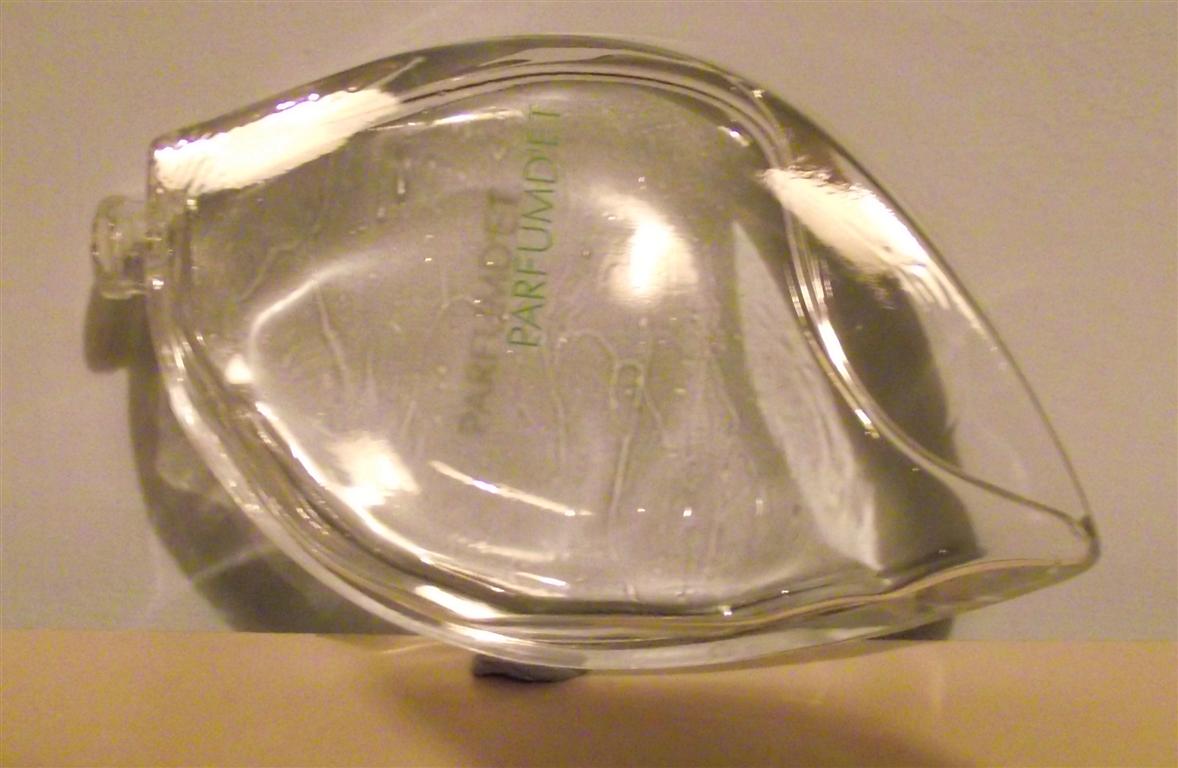 on the River Tagus in Lisbon, looking at old fragatas, canoas and similar local working boats. Following this visit,  David had sent me a set of plans for a Canoa da Picada, an extremely elegant Portuguese sardine-fishing boat, with a flush deck, a huge lateen sail on the foremast and a little jigger mast at the stern.  It was a project which I had been meaning to do for a while and now I had the perfect bottle!

I say ‘perfect’ though with some reservations:  With an overall length of 12.5cm  the job would be quite a small one but with a width of just 2.5cm at the widest part, tapering to nothing in all directions and an internal neck opening of just  7.5mm the job was going to call for some careful planning and even the manufacture of some specially small wire tools.

The Canoa is quite a beamy little vessel and I was faced with the choice of maintaining the correct beam/length ratio and therefore having to make a tiny boat which would not adequately fill the bottle or reducing the beam, but not so much that it looked out of proportion for a small vessel. In the end I compromised, reducing the beam by 25% but leaving the boat almost touching the glass on both sides, leaving very little space in which to sort out the rigging. 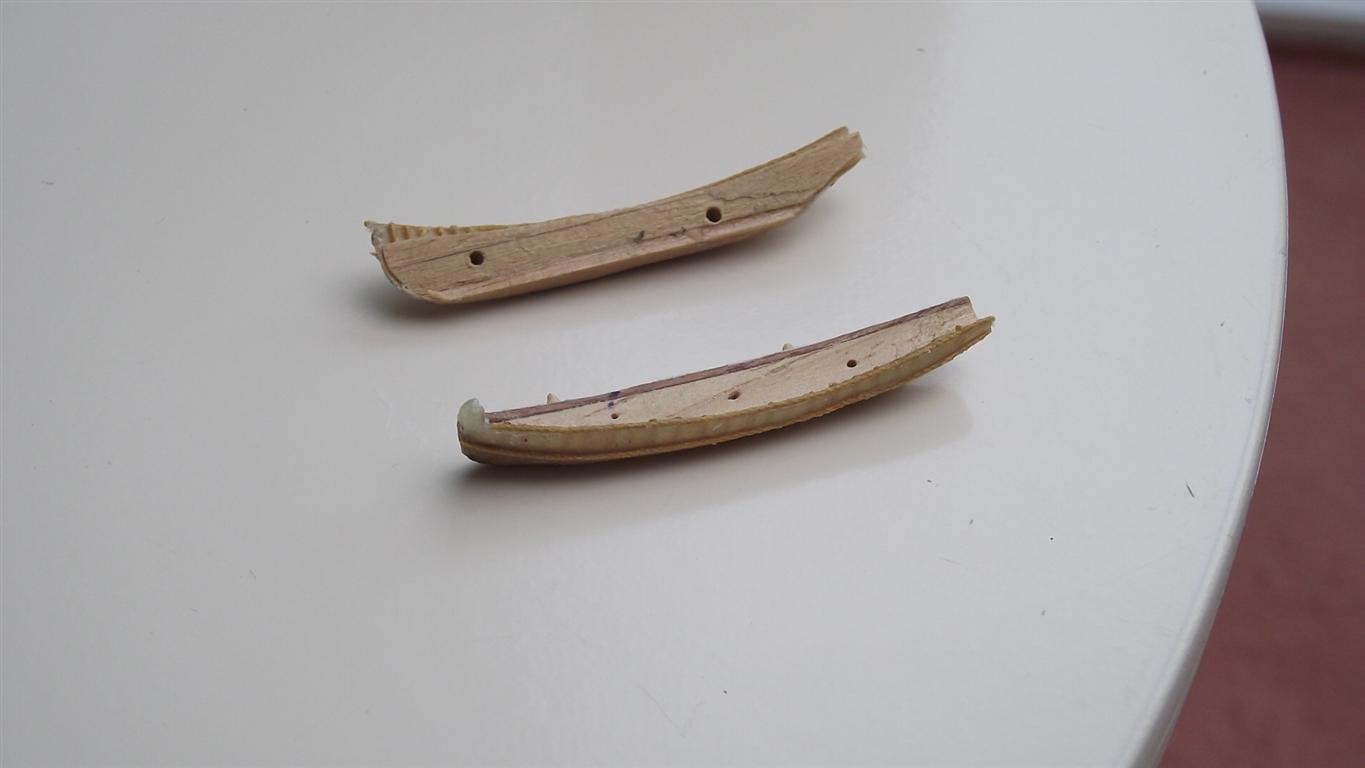 The hull was carved from a piece of scrap, split in two down the centreline and fitted with bulwarks of thin  wood veneer. The transom was not included since the stern section with jigger mast was added once the hull pieces were in the bottle and joined with small dowels.

Getting the two halves of the hull together in the bottle was far more difficult than I had anticipated since there was probably only a millimetre or two to spare on each side of the joined hull and the bottle’s internal width got progressively smaller above deck level. 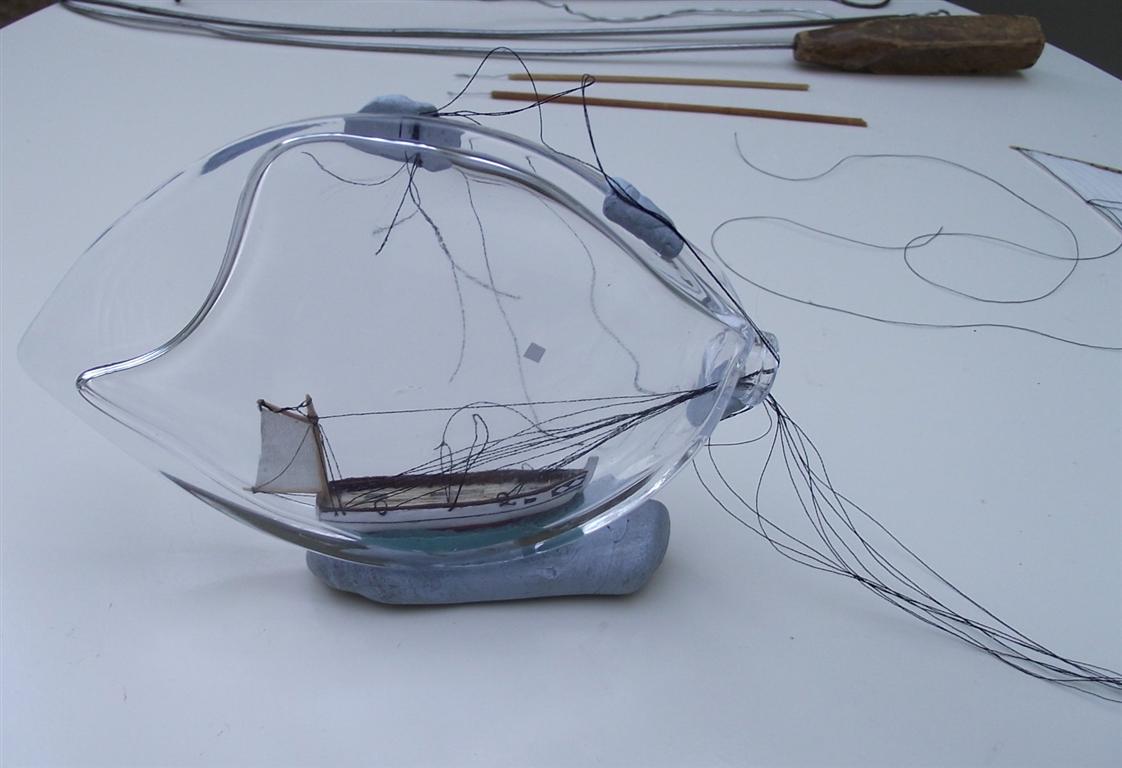 In the photo above the jigger mast/stern assembly has just been inserted and the shrouds fed through the bulwarks using the thread pullers.  The awkwardly-shaped bottle is held temporarily on a lump of ‘Blutack’; further smaller lumps are just ‘stuck’ on to the outside of the bottle to allow rigging threads to be temporarily anchored.  It’s the most wonderful material with a ‘tacky’  texture and is useful for all sorts of ‘holding’ tasks. I often pick up threads or insert small items into place by using a small ‘blob’ of Blutack on the end of a wire or stick. If you’ve never used it, try some !!

The photo, lower left, also shows the threader loops along the bulwark ready to pull the foremast shroud lines through.

The large lateen sail, like the jigger,  was cut from linen which was rolled up to go through the bottle neck and then un-rolled very easily without any creases which paper might well have done. 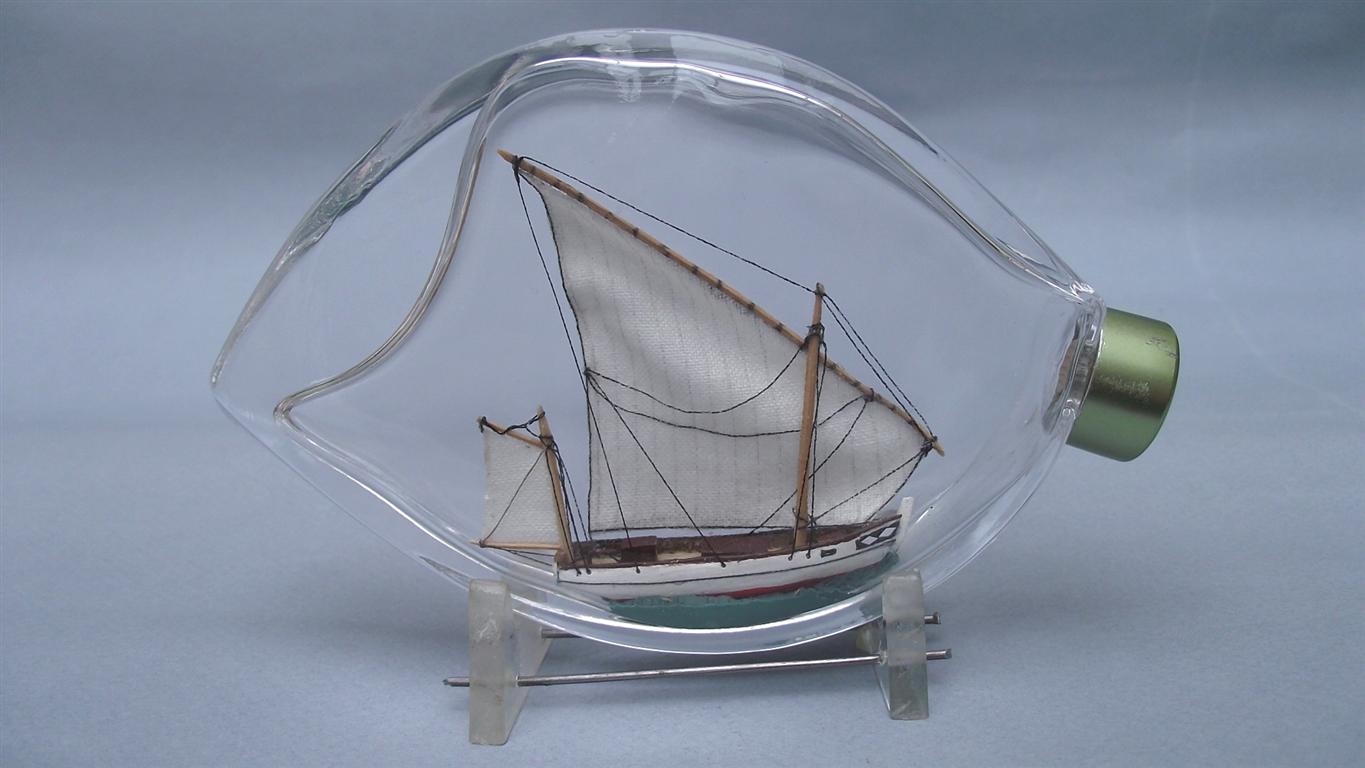 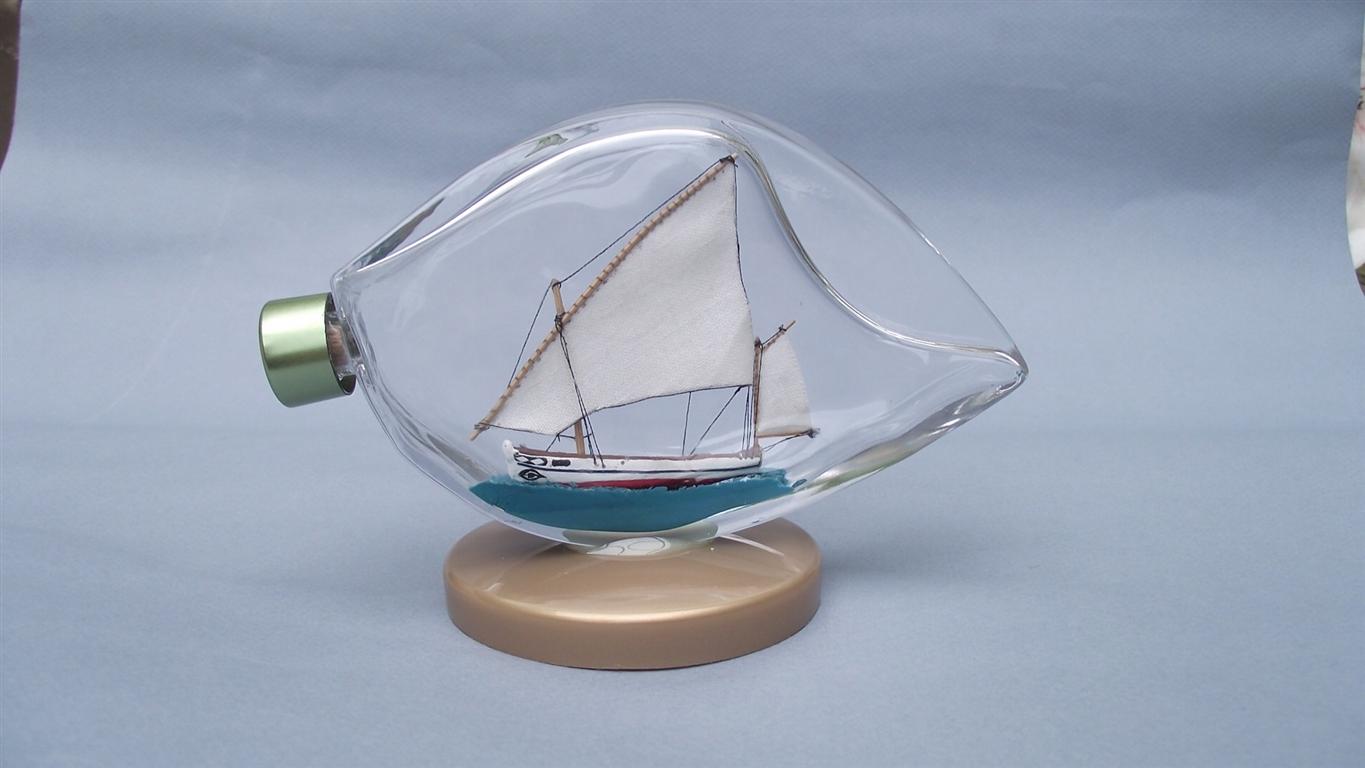 This has certainly not been the easiest model to make, though I learned a lot and found the second version in a similar bottle a little easier, but  both were rewarding to make and I felt they fitted the bottles perfectly!