"The Lovely Bones" Movie and Trailor

"The Lovely Bones" Movie and Trailor

Dreamworks’ Production of "The Lovely Bones"

Jim Goodwin was the artist of the ships in bottles used in the movie. Visit his artist page to read the Storyboard/Instructions for the Mercury 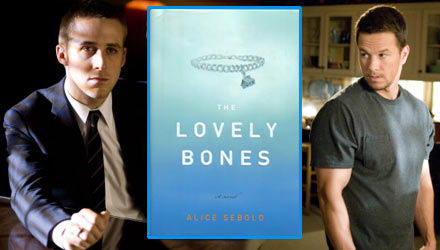 "Lovely Bones Trailor" - Click here to see the trailer for this movie.

In September 2007, Jim Goodwin was contracted by Dreamworks Production to provide ships in bottles (sib), ships to be inserted into bottles, and set dressings for their adaptation of Alice Sebold’s 2002 novel "The Lovely Bones."  The film, to be released in Dec. 2009, was directed by Peter Jackson (The Lord of the Rings films) and has Saoirse Ronan, Rachel Weisz, Mark Wahlberg, Stanley Tucci, and Susan Sarandon portraying the main characters.

Mark Wahlberg and Saoirse Ronan portray father and daughter who insert and raise the masts of this ship.  Several ships were made for the actors to insert as well as bottles with the ship ready for the actors to just pull the strings to raise the masts. When the production staff informed Jim of their plan to use the Mercury as their main ship, he advised them to choose a less technically complicated vessel for the actors.  The prop manager responded to Jim’s concerns by saying, “Welcome to the film industry…where no one listens to an expert!”

"As for the Lovely Bones, I made the SIB's...as well as the real big model behind Mark Wahlberg in his hobby room.  From reading the book by Alice Sebold, I knew that the SIB's played an important role in the father/daughter relationship.  From viewing the trailer, it looks like director Peter Jackson is expanding that role to metaphysical links after the daughter is killed.

Since the story took place in the mid-70's, I was able to use modern bottles.  The star-sib, Mercury, is in an Evan Williams 1/2 gallon.  I would buy the bottles and send the production staff/crew the booze in another bottle.  Several weeks later, I got a call from them saying, "Hey Jim,...what can you put in a Johnny Walker Scotch bottle...you'll send us the scotch, right?" So...I got a bunch of liter J.W. scotch bottles...sent them the scotch...and inserted a four-masted schooner in the bottle.  The next time I spoke with them, I said, " Why don't you pick some rum bottle...I'll drink that."

I was sending all sib's,sib-kits, and set dressings (the big Mayflower poster in the hobby room I sent) to PA where all the outdoor filming was being done.  They filmed the indoor scenes in New Zealand where Jackson's studio is located.  After I had completed the contract, I received an email from NZ asking for some more Mercury's and 4-masters.  Somehow, the story board instructions for each ship used did not make it down to NZ's production staff.  So, after getting an email inquiring "How do you insert these things into a bottle ?"...I emailed them the storyboard."