The Story of ‘Welkom Aan Boord’

At the beginning of 1985 four Dutch bottleship builders were known and all were members of the European Association of Ships in Bottles (EASiB), the president of which lived in England and the secretary, Aubrey Dunning, lived in Utrecht. Among them was Hans de Haan, the present ‘helmsman’ of Welkom aan Boord.

In August 1985 the Dutch ‘Rijks Post Spaarbank’ (Post Office Savings Bank), one of the main sponsors of SAIL Amsterdam, launched an advertising campaign.  The theme was saving/collecting.  Hans was invited to collaborate because of his collection of bottleships.  Advertisements appeared and a booklet about saving (money) and collecting bottleships was published.  As a consequence of the advertising campaign the hobby of ships in bottles became more widely known.  This resulted in an increase in the number of Dutch members of the EASiB.

An article published in the Amersfoortse Courant, a local newspaper, about Hans and his bottleship collection lead to an invitation by the director of the ‘Veluwe Museum’ in Harderwijk to organise a exhibition of bottleships in the museum.

That was the opportunity for Hans to organise the first meeting of the Dutch bottleship builders which took place at the end of September 1985 in Harderwijk.  During the meeting it transpired that a majority of those who were present were not fluent in English.  So Bob de Jongste from The Hague took the initiative to publish a regular newsletter about bottleships and related subjects in the Dutch language.  It began as a single A4 sheet and has grown to the present magazine, ‘Welkom aan Boord’ in A5 format, with colour pictures and published quarterly.  As time passed more bottleship builders and collectors subscribed to ‘Welkom aan Boord’.

The goals of the association are:

This is achieved by means of:

‘Welkom aan Boord":  Is published 4 times per year and contains information about the bottleship scene in The Netherlands and abroad.  Additionally building plans, tips, tricks and pictures of the work of members are published. From 1985 to 1990 and 1996 to 1997 the editorship was in the hands of Bob de Jongste.  From 1990 to 1995 Hans de Haan was the editor and since 1997 Henny Fransen is our editor.

Meetings: Every year a meeting is organised somewhere in The Netherlands. On average 30 people attend.  The meetings are always greatly appreciated by those who participate.  It is enjoyable to chat about bottleships and admire the models, photos and special tools that are brought along. And importantly: swap experiences and ideas. The aim is to always invite a speaker.  On one occasion our guest speaker was a former engineer from the Dutch whaler ‘Willem Barentsz 2’.  He told his story and showed us an impressive series of slides about whaling in the 1960’s.  On another occasion we invited Mr. Soetens, a retired director of the glass factory, Verenigde Glasfabrieken, in Leerdam.  He shared his extensive knowledge of glass and bottles with us.

Exhibitions: The first exhibition was organised in Harderwijk in 1985.  Some 80 bottleships were displayed.  It attracted attention from the press and even television was present on the day of the meeting and set-up of the exhibition.  This resulted in a ten minute film report in the TV programme ‘Van Gewest tot Gewest’ (From Region To Region).  Over the years we have organised a further ten exhibitions, to show the results of our hobby to a wider audience.  The largest was the one organised in the Amsterdam Maritime Museum in 1987.  230 bottleships were on display. 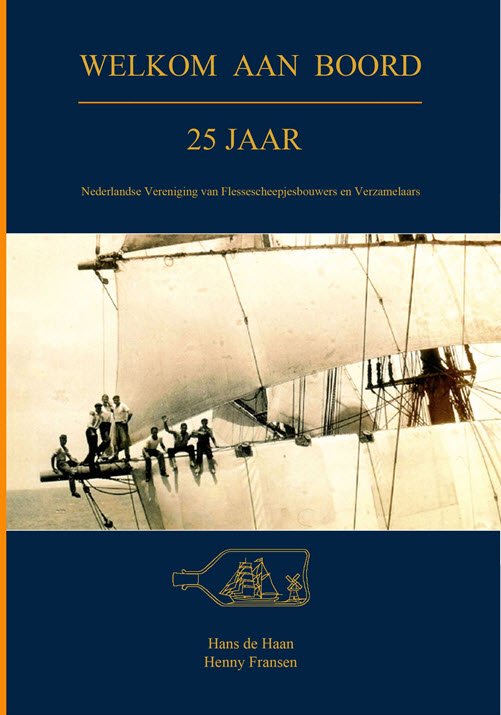 Dutch Association of Builders and Collectors of Bottleships

Our 25th anniversary (October 2010) was, for me, the reason to compile this book.

·         Reports, including pictures, of our annual meetings

·         A brief history of bottleships, including pictures,

·         A photo gallery of bottleships and ‘patience’ bottles built

·         A list of the bottleship associations around the world,

To make the book accessible to an international audience (i.e. members of the bottleship association abroad) a majority of the articles have been translated into English and placed next to the Dutch articles.