The following is Terry Butler’s account of her marvelous day and opportunity to demonstrate her talents at Mystic Seaport, Connecticut.

“September 30, 2006 was Member's Day at Mystic Seaport.  I had been contacted a month or so before that date and asked if there was any way I could be there to help demonstrate putting ships into bottles.  I had been recommended by Ralph Preston – a member of the Ship-in-Bottle Association of America and a veteran ship bottler, who had seen the article 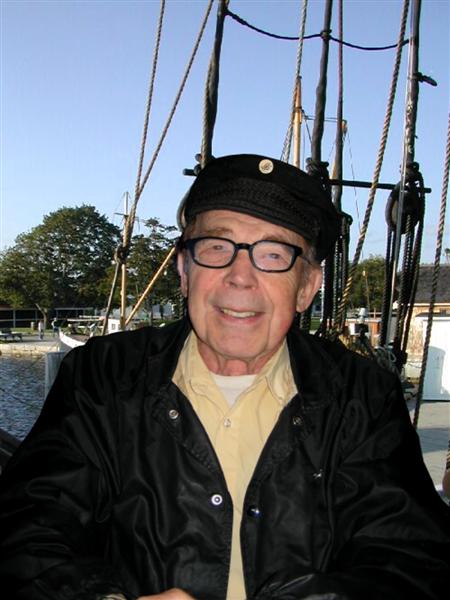 in the Bottleship magazine from England.  I had never met Ralph so all of this was a bit of a surprise to say the least.  I decided to take on the new challenge and I hurriedly made two demonstrator models for that purpose - the Joseph Conrad and the Charles Morgan - both Mystic Seaport ships.  I thought they would be suitable for repeat demos but once built they proved difficult and I knew I could only insert them ONCE into their bottles for demo purposes.  SO, I took along one of the proven movie ships - the Waterwitch. I knew that one was very cooperative.  I mailed the bottles and the models since we were flying and hoped everything would arrive safely in CT.  I only found one small repair needed upon arrival so I was quite relieved.

We arrived September 28th and spent part of those pre-demo days to take photos and really SEE Mystic Seaport.  It's a wonderful museum/ recreated whaling village and I managed to take 200+ photos the first day!  My husband and I had to go to CVS and download my memory card to CDs to free up my camera for more photos!  Member's Day we got to our demo room early and stayed busy all day until 30 minutes after closing.  It seems we were one of the busiest rooms at the Seaport that day as there was a huge interest in learning how ships are put into bottles.  Children were fascinated and many adults showed a genuine interest in LEARNING the hobby. Ralph Preston had displays along with video, slide shows, and talks.  The two models he brought along were museum quality and I was busy asking him questions whenever the chance permitted itself.  His tools were equally amazing - even more so in that he designed and constructed them all.  We became fast friends.

Demonstrating is something I'd definitely love to do again.  Next time, I want to have a couple of stronger and simpler demo models that anyone can actually try for HANDS ON demos.  It would have been great to have those this time but there wasn't time for making any additional ships.”
Terry Butler, October 3, 2006
Click on a picture to enlarge