Leon Labistour was a ship in bottle builder who received his inspiration from his father who also build ship in bottle models. He always strove to find new techniques and better ways to build, and his work and experience led to his authoring the book, Making Ships in Bottles - Beginners to Advanced, Marine Arts Publication, 1990. 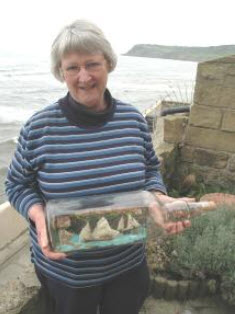 He served both as a President of the European Association of Ship in Bottles, and earlier as the editor of The Bottleship magazine, the quarterly journal of the Association.

Many years ago, Leon quit his desk job to pursue, full-time, his long held interest in arts and crafts. Originally, he set up operations in Hull, his home town, but changed the location to the idyllic sitting in a 17th century cottage on the edge of the sea at Robin Hood's Bay.

Throughout the years his main encouragement was from his talented wife, Patricia. She was his working partner and she possessed many talents and held a life-long curiosity with ships in a bottles. Her own highly individualized modeling has been exhibited at prestigious venues and given TV coverage on several occasions. Leon and Pat operated as a working partnership.