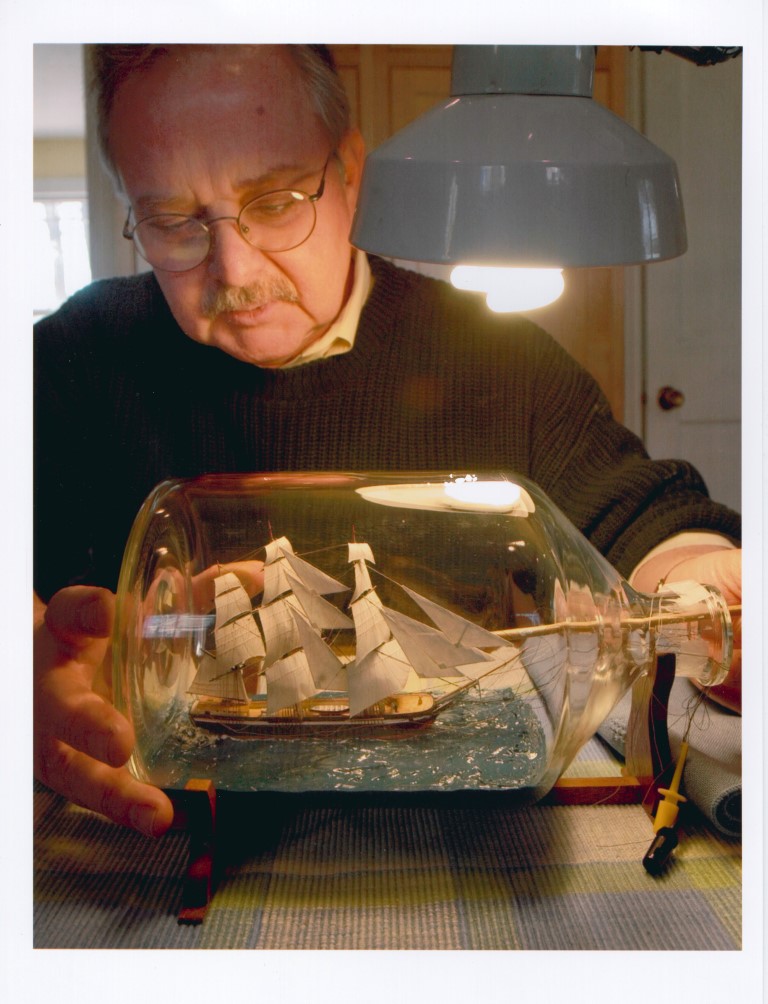 Born and raised in Alabama, I was educated in New England, attending Boston University for undergraduate and Brown for graduate study.  Instead of becoming an academic I enjoyed a career in the book business, running bookstores in and around Boston for 35 years.  My wife Christina and I settled in coastal Newburyport, Massachusetts almost 30 years ago.  She is a librarian with the University of New Hampshire and a part time potter and horseback rider.  Together we enjoy hiking, cycling and kayaking.  Without me she is a runner and practices yoga.  Without her I sing in the local choral group and play cello.

As it became clear the future of the bookstore was not looking great, I got out and settled back into what had been part time work for even longer, ship modeling.  Like many ship modelers I started young and picked it up more actively in college.  After graduating I became involved with museums in the area, doing research and repair work on ship model collections.  Restoration was good part time work but professionally unsatisfying so I began to devote more time to creating new models.  By far, most of these went into bottles.
I was fortunate to be in this part of the country where I was able to meet and work with some highly skilled ship modelers and marine artists as well as become active in organizations recognizing and promoting the art of ship models.  It has been a good environment to learn and develop skills.  Members of the ship model community here have been surprisingly generous in sharing their experience and expertise.  In return, I began offering classes about 25 years ago, with the hope something of what I managed to learn will go back into this community.
The main goal has been to apply the standards of traditional ship modelling to ships in bottles.
In itself that phrase can mean all sorts of things, but the idea was to get away from the assumption that because a model is in a bottle much should be forgiven.  Any ship in a bottle should be a good miniature first.  Its presence in a bottle is entirely the artist’s decision and should have the same relevance and consequence a case does for a regular ship model.  If successful, the bottle should enhance and complement the model, not define it.  I believe I have been successful, at least in this area, in earning greater respect for the bottled ship model.
Also like traditional hip modelling, ship in bottle building is a progressing art.  The quality of models and techniques continues to improve.  I fully expect, as my old eyes get weaker, to see better ships in bottles than I had ever considered when starting out so many years ago.
Building Plans for the "Lagoda" by Alex Bellinger
Ship in Bottle Restoration - first published in the Nautical Research Journal, Summer 2016, featuring work by Alex Bellinger
Other examples of this Artist's work - Click on a picture to enlarge