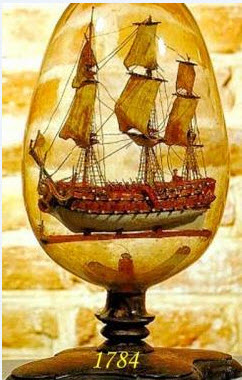 Giovanni Biondo is generally accepted as the builder of the first documented ship in a bottle ever made, but we know little about him. There only real information we have about Giovanni Biondo was obtained from bits of information he put inside the ships in bottles he made.

It is thought that his ships in bottles were created for the Venetian Navy. They are very detailed models with designs for Venetian First Class and Second Class line of battle ships. And, if in fact these are commissioned works then the craft did not begin as a folk art, but as a work of a master builder. The bottles are very expensive glass blown by highly skilled artisans. 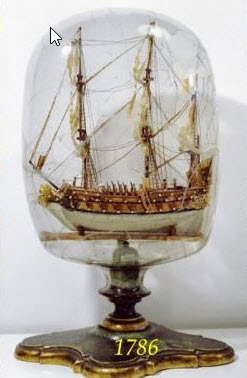 Giovanni Biondo made his first ship in a bottle in 1784. The 1784 bottle is of a First Class Ship, a three-masted Turkish or Portuguese ship. Op de It has spiegel zijn de letters 'CGB' met daaronder een 'F' te the letters "CGB" above a "F." lezen.On the prow sail it states: "gioni Biondi, fecit 1784.” Op de vlag is een wapen te zien.The flag is shown as a weapon. De fles is, incl. de The bottle is 45 centimeters high. voet, 45 cm hoog.uit 1784 (zie foto) bevindt zich in het HolstentorIt is now located in the HolstenMuseum in Lübeck, Duitsland. Museum in Lübeck, Germany. Het model kwam The model wasrond 1880 als geschenk van ene kapitein Krüger in presented to the museum around 1880 as a gift from a captain in Krügerhet bezit van het museum..

His second model was made in 1786 and it is of a model of a Second Class Ship. It is now in a private collection in Milan. 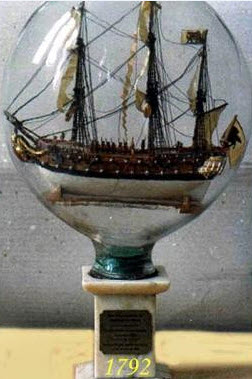 His third ship in a bottle was a 1792 bottle identified as the Fama. It is now in the Maritime Museum in Lisbon, Portugal.  Inside the 1792 bottle the Artist included the statement: “captain Giovanni Biondo Veneto,” the title “Captain Giovanni Biondo of Venice.” Although he claims to have been a Captain there are no other records or logs to verify this. The absence of that record may lead us to believe that it is not true or simply a self-proclaimed title.

The first three ships in bottles were made by Giovanni Biondo of Venice, the fourth, made in 1806, is by Fransesco Biondo who is assumed to be Giovanni's son. The 1806 bottle is in a glass art museum in Murano, Italy, but not on display.

These ships are built in rare and expensive glass blown bottles by highly skilled artisans. Both the ships and the glass are amazing works of art by master craftsmen.