The History of Ships in Bottles 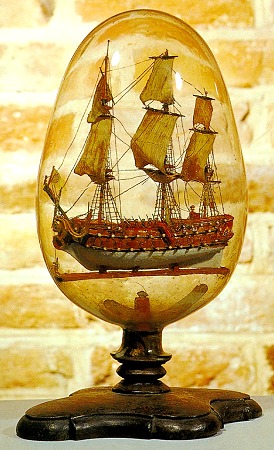 Unfortunately nothing is known about the first maker of a ship in a bottle. The oldest ship in a bottle (SIB), as far as we know, was made in 1784 in Italy by Gioni Biondo and this SIB was donated by' Captain Kruger of Lubeck to the 'Museum fiir Kunst und Kulturgeschichte der Hansestadt Lubeck' in Germany. It is said that this SIB is a so-called ship-owner's model, which was made by a professional model builder. The SIB is numbered 7357 in the museum list. It is probably a Turkish or a Portuguese three-masted warship. It is put in an egg­-shaped bottle, which is placed upside down over a wooden stand.

The oldest SIB in the Netherlands is dated 1795. It is a so-called POON-ship, a one-masted freighter with lee-boards, ranging from 16 to 60 tons. It was also used for regular passenger service. This SIB can be found in the Maritime Museum at Rotterdam.
The SIB became very popular after the fast sailing ships like the clipper were put into service. Consequently most of the antique SIB's which can be found (very scarce) are dated later than 1840.
The first mention of objects in bottles goes back to 1719. A German, Matthias Buchinger, (1674-1722) born without arms and legs has built objects in bottles. As a matter of fact we do not know whether he ever built a ship in a bottle, but Alan Rogers has been able to trace one bottle with mining scenery in Snowshill Manor, Snowshill, Worcester. A search is going on to find further material about Buchinger of whom we also know that he was a famous calligrapher later in England where he was called Matthew Buchinger.
Another

mention of objects in bottles goes back to 1737 in Germany. See a.o. 'Bauer- liche Volkskunst' by Siegfried Seidl and see also 'Berchtesgader Eingricht' by Karl Schuller. Both refer to the “Heiliggeistkugeln” (Holy Ghost Glass Globes) which still can be admired in many German museums or in private collections. In these “Heiliggeistkugeln” people put an image of their favorite patron saint. The globe was hung over the soup kettle. The steam of the soup condensed against the glass globe and the water drops falling back into the soup were the blessings of the saint. The "Helliggeistkuge” was not only known in Germany and Austria, but also in France, Scandinavia, and many of the East-European countries. 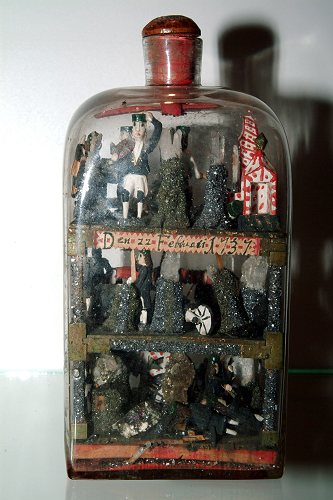 Many objects in bottles had to do with the mining industry. The oldest miners-bottle in Germany is dated 1725 and this bottle is on show in the “Thiiringer Heimatsmuseum.” (Rariora Naturae et Artis) a bottle showing the interior of two mine galleries, one on top of the other, with miners, tools, etc. See 'Antiqitaten-Zeitung' Nr. 3, 1985 abd 'Bergmannische Geduldflaschen' by Otto Fitz and Peter Huber, Vienna 1995.Joh. Christ. Kundmann introduces in 1737 in his museum of curiosities.
We still believe that the first regular SIB was made by an emigrant from Germany, Austria, Czechoslovakia, Hungary or some other country in that part of the world. Or perhaps a Russian, a Pole or an emigrant from Scandinavia. We simply don't know whether this mystery ever will be solved is also a mystery.
It was originally believed that the art of making SIB's originated from England or Ireland, but extensive investigations through local museums have not revealed any proof that could make good that assertion.
We have received the information that examples of Matthias Buchinger’s work or information about his work can be found in the following:
The William Andrews Clark Memorial Library in Los Angeles, USA
The City Library of Bamberg, Germany
The Henry E. Huttington Library in San Marino, USA
The Germaniches National Museum in Nurnberg, Germany
Bibliography:
Ten Thousand Wonderful Things, Edited by Edmund Fillingham King M.A.
Learned Pigs and Fireproof Women, Ricky Jay 1986.